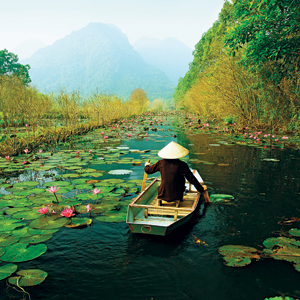 Upon your arrival at Hanoi International Airport, our representative will meet you and transfer you to your hotel. Spend the rest of the day at leisure. 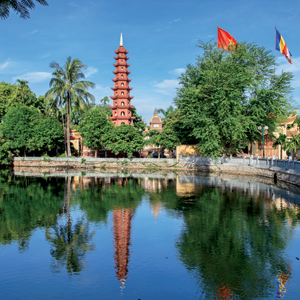 After breakfast, meet with your local guide for a private tour of Hanoi, starting by passing the President's Mausoleum where Ho Chi Minh is laid to rest. See the Stilt House where Ho Chi Minh lived from 1958 through 1969, preserved just as it was when he lived there. Continue to the Temple of Literature, a serene palace of knowledge built in 1070 dedicated to Confucius that eventually became Vietnam's first university.

Next, take a walk through Hanoi's Old Quarter, an enchanting array of narrow alleyways and shops that are known collectively as "The 36 Streets", each named after the type of merchandise traditionally exchanged on that particular street - from fabrics to medicines and even tombstones. Stroll through these vibrant streets and enjoy a Vietnamese coffee while admiring the pulsating energy of Hanoi. Finally, stop by the Ancient House on Ma May Street, one of the 14 traditional houses in the Old Quarter that was built in the 18th century that has been beautifully restored to retain its traditional architecture and timeless beauty.

After the tour is complete, the rest of the day is at your leisure, or enjoy a Water Puppet Show in the city. 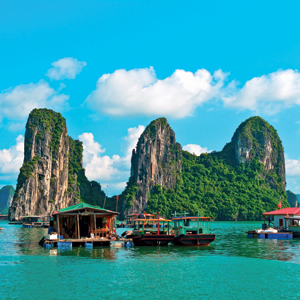 After breakfast, check-out of your hotel in Hanoi and meet with your driver for your private transfer from Hanoi to Halong Bay where you will embark upon a Halong Bay Cruise. For the purposes of this itinerary, we will be listing activities aboard a Bhaya Classic Cruise, but you are welcome to choose the cruise ship of your choice. Halong Bay is an almost otherworldly place, where giant limestone cliffs topped with lush rainforests tower above you while a complex network of caves hide beneath.

Upon boarding the ship, enjoy a welcome beverage of your choice and then dig-in to a Vietnamese buffet lunch as you sail by the quiet sides of Halong Bay on route to the Trinh Nu area. Famous for the eponymous Trinh Nu cave, one of the bay's most beautifully sunlit caves, and for its crystal clear water, you'll have the choice between swimming or sea-kayaking on a private beach and enjoying a happy hour aboard the boat with panoramic views. After dinner, engage in the traditional Halong Bay activity of squid fishing! 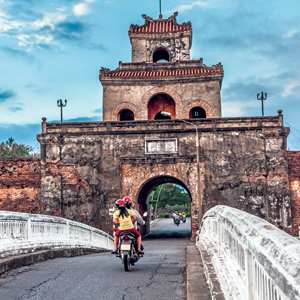 Wake up this morning and head to the cruise's sundeck for a morning Tai Chi session to recharge and rejuvenate before the day begins. Vietnamese coffee, tea, and fresh baked pastries await you after your Tai Chi has ended. Today you'll explore Sung Sot Cave, a UNESCO World Heritage Site located on Bon Ho Island. Also known as "Surprise Cave", when this enormous cave was discovered by the French in 1901, they were absolutely stunned by its beauty, which is how it received its name. After touring the cave, dine upon a brunch buffet and relax on the sundeck as the ship returns to port. 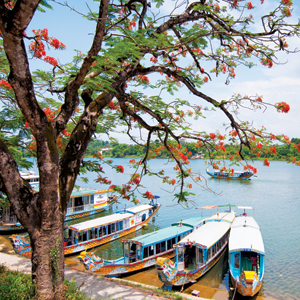 As the capital of Vietnam for more than 140 years, Hue houses the ancient temples, imperial buildings, and French-style edifices left over from the 17th century.

Visit the Old Imperial City, located in the heart of Hue's Imperial Citadel, a vast complex built in the early 19th century and modelled after the Forbidden City of Peking. The original walls stretched over 6 miles and were surrounded by a wide moat. Today, most of the buildings have been destroyed due to the bombing during the Vietnam-American War, but the monuments that remain provide a fascinating glimpse into the court life of the Nguyen Dynasty.

Approach the city past the striking Flag Tower, where a giant Vietnamese flag waves proudly overhead, to the imposing Ngo Mon Gate, the main entrance to the Imperial Enclosure. Enter into an area of spacious courtyards and serene lotus ponds, and visit Dien Tho Residence (Dien Tho palace) is where the Queen mother lived, visit Thai Hoa Palace, the magnificently decorated reception hall, the Halls of The Mandarins, and the original Nine Dynasty Urns, among other sites. Visit the Imperial Tombs of Tu Duc and Khai Dinh.

Venture into the countryside around Hue to the Imperial Tomb of Tu Duc. Tu Duc, the longest reigning Vietnamese emperor, designed and built this elegant tomb during his lifetime, using it as a retreat for meditation, reading and theater performances. Take some time to soak in the tranquil atmosphere, wandering among the gracefully proportioned pavilions, courtyards and lotus ponds.

Afterwards visit the Imperial Tomb of Khai Dinh, dramatically located on a hillside. The last of the monumental tombs of the Nguyen dynasty, completed in 1931, this tomb incorporates distinct European elements into the traditional Vietnamese architecture. Lastly, visit Vinh Tu garden house with Introduction by House Owner. 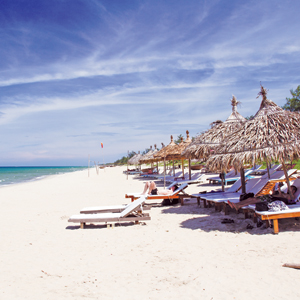 Hue to Hoi An:

Drive south from Hue along scenic mountain roads with spectacular views over the coastline. Highlights along the way include the dramatic Hai Van Pass, the high dividing line between the climate zones of North and South Vietnam, Lang Co, a lovely stretch of beach curving outwards between a clear blue lagoon and the East Vietnam Sea, and the large coastal city of Danang.

After arriving in Danang, visit the Cham Museum, an elegant colonial building which houses the finest collection of Cham sculpture in the world, and pass by Non Nuoc Beach, a famous spot for American soldiers during the Vietnam-American War. Continue south to Hoi An, stopping en route to visit the Marble Mountains, five stone hillocks, once islands, that rise sharply from the surrounding rice fields. Riddled with caves and shrines, they are said to each represent one of the five elements of the universe. Finish up your sightseeing in Danang and head to your Hoi An hotel for the night. 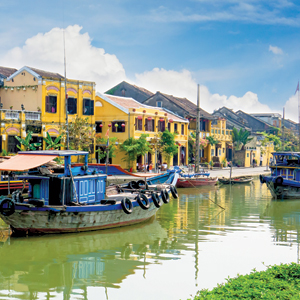 Hoi An is a picturesque river town set alongside a network of canals remarkable for its eclectic and historic architecture that is a blend of indigenous Vietnamese and foreign influences. The city was a major South East Asian trading port and the city's streets reflect that history. After breakfast, explore this city on foot on a private walking tour that will take you to all of the town's famous highlights. Walk across the Japanese Covered Bridge, the iconic symbol of the city, built by Japanese merchants in the 17th century that connected the Japanese community with the Chinese community across the river. Near the bridge is Sa Huynh Museum which houses exhibitions from the earliest period of Hoi An's history. Wander into the Tran Family Chapel, a 200-year-old house built for worshipping ancestors. You'll also visit the Chinese Quan Cong Temple, built in 1653, which contains a partially gilded statue as its centerpiece. Tour the Phuoc Kien Pagoda, otherwise known as the Lotus Leaf Pagoda for its giant lotus leaves that rest in its ponds. If there is time, your guide will also gladly take you to other sites such as the Phung Hung House, a home built in a combination of Vietnamese, Japanese, and Chinese styles where the same family has been living for eight generations.

After the tour is complete, return to the hotel and the rest of the day is at your leisure. 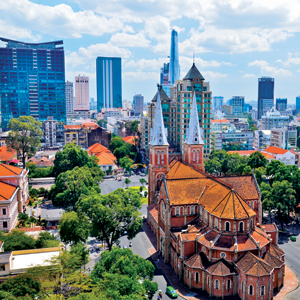 Teeming with energy, activity, and commotion, Ho Chi Minh City is a meeting point between the modern world and traditional Vietnamese life. Embark this afternoon on a walking tour of the city by first strolling along Dong Khoi Street, the main shopping street and the heart of the old colonial city. Pass by landmarks of bygone colonial times including the French-style City Hall (Hotel De Ville), the old Opera House, and the neo-Romanesque Notre Dame Cathedral that always stands out in the city's skyline. Next, dive into the city's modern history with a tour of the Reunification Palace, where the original tanks who famously stormed the building remain on display at the entrance gates, commemorating the unification of South and North Vietnam. Continue to the War Remnants Museum which extensively documents the post-colonial conflicts between Vietnamese and French forces and the Vietnam-American War as well. Expect detailed photographic exhibitions, collections of weaponry, and harrowing accounts of these deadly conflicts. Finally, end the tour with a visit to the Emperor of Jade Pagoda, also known as Tortoise Pagoda, an active Taoist shrine that is filled with ornate woodcarvings where the air is filled with incense.

Once the tour is complete, return to your hotel where the rest of the day is at your leisure. 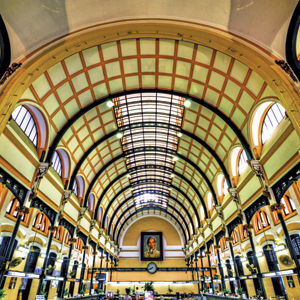 Today take a tour of the Cu Chi Tunnels. These tunnels, never discovered by American forces during the Vietnam-American War, were used as an important base of operations by the Vietcong during the famous Tet Offensive. Stretching over 120 miles, these complex underground network of tunnels was dug by hand and consisted of command posts, field hospitals, bomb shelters, weapons factories, barracks, and much more. Today you can walk (and sometimes crawl) through these tunnels to learn about the daily life of the Vietcong, marveling at their ingeniously disguised entrances and terrifying booby-traps. 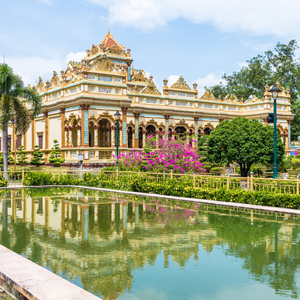 Ho Chi Minh City to Can Tho:

From Saigon, head toward Can Tho, stopping at My Tho, a bustling town in the rich agricultural region of the Mekong Delta, and visit the Vinh Trang Pagoda which exhibits a harmonious fusion of Asian and European architectural styles. Afterwards, board a local boat to explore the islands of the Mekong River while stopping at a fruit orchard to enjoy fruit and tea while listening to local music. The trip also includes a brief sampan ride through the tiny waterways that thread the island. From My Tho, continue by vehicle onwards to Can Tho to check into your hotel. 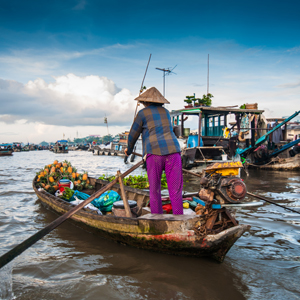 In the early morning, set out by boat to explore Cai Rang Floating Market. The biggest and most bustling of the Mekong Delta markets, Cai Rang attracts fruit and vegetable vendors from all over the region. Buyers on smaller boats weave between the large barges selling wholesale produce and each vendor advertises fresh samples of their wares on long poles that tower overhead above the colorful boats.

Sail through the market, watching people haggle and trade and possibly sample some of the fruit yourself. Explore some of the backwaters, canals, and fruit plantations before returning to the pier. Afterwards, explore the rural city of Can Tho taking in the distinctive Ong temple and a bustling local market and experience the sights and sounds of the back roads. Return on the main road with a visit to Binh Thuy Ancient House, a beautifully preserved and ornate French-style house built in 1870.


(Breakfast & Accommodations, Can Tho)

DEPART CAN THO:
Take a private transfer from your Can Tho Hotel to Ho Chi Minh City Airport with your guide and continue on to your next destination!