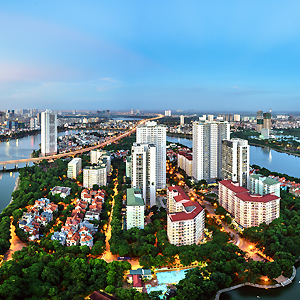 After clearing customs at Hanoi Airport, meet your driver for the private transfer to your hotel. Remainder of the day is at your leisure and dinner will be on your own this evening. 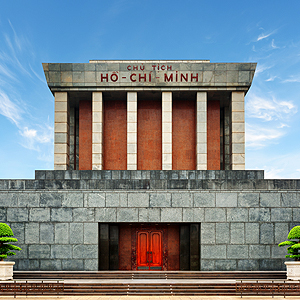 Begin the day by passing President Ho Chi Minh's Mausoleum, only viewed from the outside and continue on to the Temple of Literature, a perfectly-preserved example of traditional Vietnamese architecture with its walled courtyards, colorful pavilions, and graceful gateways. Founded in 1070, the temple is dedicated to Confucius and was the site of Vietnam's first university.

Afterwards, take a walk through the Old Quarter, a fascinating network of narrow alleys and shop houses also known as 'The 36 Streets'. Each street is named after the merchandise traditionally sold there, ranging from fabrics and crafts to medicines and tombstones. Enjoy Vietnamese coffee at a local coffee shop during your stroll or stop at the Ancient House on Ma May Street, an excellent example of traditional Hanoian style architecture from days gone by. 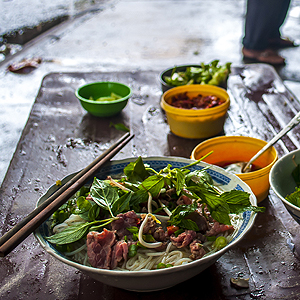 Today you will take a cooking class with a local chef. After arriving at the cooking center you will be welcomed with a cup of La Han tea before learning about Vietnamese cuisine from the chef. Discuss your food preferences with the chef, choosing between either street foods, Vietnamese foods, or international foods. Take a short walk to Chau Long Market and enjoy a tour of the "wet" market that highlights unusual items such as durian, live seafood, silk worms, and an assortment of fresh herbs and vegetables. After selecting the suitable herbs and ingredients, return to the Hanoi Cooking Center and begin! You'll work at your own work station as the experienced chefs guide you through the meal. Conclude by tasting the food you have prepared in a comfortable dining area, accompanied by local beer or wine, and receive a detailed recipe card to take home with you. 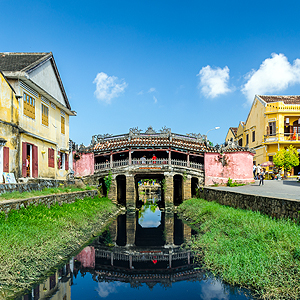 Hanoi to Hoi An:

In the morning, you'll have a private transfer to Hanoi Airport and board a short 75-minute flight to Danang*. Upon arrival, your driver will meet you for the private transfer to your hotel in Hoi An; a picturesque riverside town south of Danang. After checking into your hotel, your guide will escort you on a half-day tour. Hoi An, known as Faifo to early western traders, was one of South East Asia's major international ports during the 17th, 18th and 19th centuries. Now, this beautifully preserved historic city is best seen on foot, and our walking tour will include five* of the following sites:

Quan Cong Temple: founded in 1653, this Chinese temple is dedicated to Quan Cong, whose partially gilded statue is in the central altar at the back of the sanctuary. Stone plaques on the walls list contributors to the construction and repair of the temple.

Phuoc Kien Pagoda: Chinese pagoda built around 1690 and then restored and enlarged in 1900. It is typical of the Chinese 'clans' that were established in the Hoi An area. The temple is dedicated to Thien Hau Thanh Mau (Goddess of the Sea and Protector of Sailors and Fishermen).

Japanese Covered Bridge: the first bridge on this site was constructed in 1593 by the Japanese community of Hoi An to link the town with the Chinese quarters across the stream. The bridge was provided with a roof so it could be used as a shelter from rain and sun.

Tran Family Chapel: this house for worshiping ancestors was built about 200 years ago with donations from family members. The Tran family traces its origins to China and moved to Vietnam around 1700. The architecture of the building reflects the influence of Chinese and Japanese styles.

Sa Huynh Museum: located near the Japanese Covered Bridge, it contains exhibitions from the earliest period of Hoi Ans history.

Phung Hung House: the same family has been living here for eight generations. The house is a combination of Vietnamese, Japanese and Chinese styles.

Quang Dong Pagoda: this pagoda was open to all Chinese traders or seamen and is dedicated to Thien Hau. It is a small Chinese style temple with a lintel gate, a rockery courtyard and animals depicted in statuary.

Returning to your hotel, dinner will be on your own this evening.

* Due to time constraints only five sites can be accommodated, but it's suggested you make your wishes known regarding specific sites at the beginning of the tour.

* The flights from Hanoi to Danang v.v. are NOT yet included on this itinerary, and will need to be booked separately. 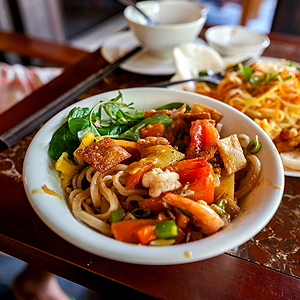 The morning is at your leisure as in the afternoon, we'll have a private cooking class at Tra Que. We'll pass through the surrounding countryside and past rice paddies to Tra Que Village, located on a quiet and peaceful stream. Tra Que village is famed throughout Vietnam for the quality and variety of its vegetable and herbs, grown using a special method of organic farming. Tour the gardens with a local farmer, with explanations of the different plants. Join the farmers in preparing the land and fertilizing it with algae from the local lake. You may have a hands-on experience by assisting with some of the activities, such as sowing seeds, watering greens, or picking vegetables. We'll make our way to the farmer's house and learn how to prepare special dishes with the local family. After a well-deserved lunch, we'll return to Hoi An by bus. 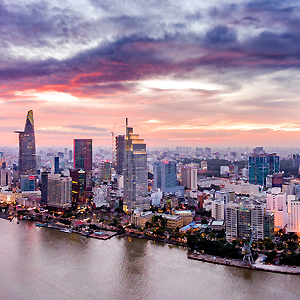 Take your private transfer to the airport for your short flight to Ho Chi Minh City. Upon arrival, meet your driver for the transfer to your hotel. The remainder of the day is at your leisure. 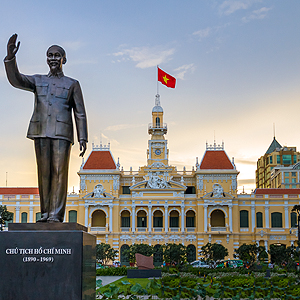 After breakfast, meet your guide for a private half-day tour of this vibrant metropolis that teems with energy, activity and motion. You'll begin with a tour of the historic center, strolling along Dong Khoi Street, formerly known as the Rue Catinat; the main shopping thoroughfare and heart of old colonial French Saigon. Pass by classic European-style landmarks such as the ornate City Hall (Hotel De Ville), and the old Opera House (both may only be viewed from the outside), and pay a quick visit to the neo-Romanesque Notre Dame Cathedral and the Central Post Office.

Afterwards we'll dive into modern history with a tour of the Reunification Palace. Formerly the Independence Palace of the South Vietnamese president, this 60's style building was famously stormed by tanks on April 30, 1975 signifying the fall of South Vietnam. It has been preserved in its original state, and the original tanks remain on display near the entrance gates. Continue to the harrowing War Remnants Museum, which comprehensively documents the travails of the long Vietnam-American War. Inside are detailed photographic exhibitions, outside is a collection of tanks, planes and weapons. A powerful experience, this museum is guaranteed to provoke strong emotions. Finally, visit the Emperor Of Jade Pagoda, one of Saigon's most interesting pagodas.

Today is free for independent sightseeing, but save your appetite for a private "Foodies Afoot in Saigon" tour. We'll head to the Ben Thanh market in the early evening to our meeting point at Pho 2000. Get ready to be fully immersed in the bustling streets of Saigon, and its world-famous street food culture. You'll hit the streets with your guide and peruse the sidewalk stalls most popular with locals. Enjoy this lively and informal atmosphere, sampling special dishes and popular local favorites. Try the Vietnamese version of pizza, banh trang nuong, with tasty toppings on grilled rice paper, and the famous banh mi, an airy baguette loaded with a medley of meats, vegetables and spices. Visit Saigon's walking street, a popular meeting point for Saigon's youth. Then cap off the evening with a cocktail at one of the city's lively rooftop bars, while enjoying panoramic night views of the city as you reflect fondly on your culinary tour.

After breakfast, take your private transfer to the airport for your return flight, or onward to your next Avanti Destination!