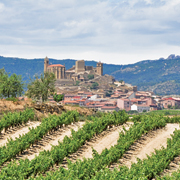 Arrive La Rioja:
Pick up your rental car at Madrid Airport or city center and drive to La Rioja. It's a great idea to stay a couple of nights to explore Madrid before starting this package. After arriving at your hotel in La Rioja, relax among the vineyards as you have arrived to one of Spain's most important wine regions. 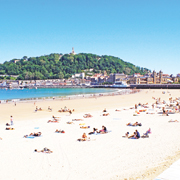 La Rioja to San Sebastian:
After breakfast, you'll take a tour of the renowned Vivanco Museum of Wine Culture. It encompasses the origins of wine, particularly the Rioja region, the variety of soils, the threats to the vines, the harvest, and ultimately, the wine making process itself. The museum plays tribute to the grape, as you enter the Garden of Bacchus, a collection of grapevines which boasts more than 220 varieties from around the world. Whether you're an oenophile, or just a casual fan of wine, this tour is informative and fun. After the tour, you'll enjoy a gourmet lunch at the adjoining restaurant, accompanied by local wines. All of this, while being surrounded by the incredible landscapes of the vineyards.

In the afternoon, time to head north on a scenic drive to the Bay of Biscay, and the coastal city of San Sebastian. The city is famous for its' several Michelin starred restaurants. Seafood of course is prevalent, and one of the most typical Basque dishes of all is bacalao al pil pil, a Spanish fish stew comprised of bacalao (cod), garlic and olive oil. Make sure to try pimientos de piquillo, roasted small bright red peppers, and slabs of fore rib called txuleton, which are grilled over coals and served with nothing more than a sprinkling of good sea salt. 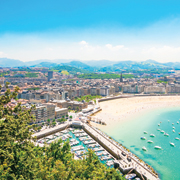 San Sebastian:
Today you'll discover San Sebastian from a different point of view with a private walking tour with your local guide. Your sightseeing tour will help you experience and understand the differences between the Basque region and the rest of Spain, while at the same time touching the history and sights and flavors of this beautiful city by the sea. Then you'll take the funicular up to Igeldo Hills to take in incredible views to the Cantabria coast. FIshermen`s houses, a smart suburb and modern districts make it one of the most attractive cities in the Basque country. 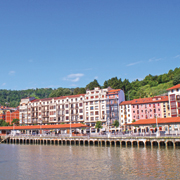 San Sebastian to Bilbao:
After breakfast, it's a short drive to Bilbao. This rejuvenated port city is now an international art hot spot, thanks to Frank Gehry's titanium masterpiece, the Museo Guggenheim. After checking into your hotel, you'll experience the Spanish culture, accompanied by a guide who will be pointing our little-known cultural details throughout your private walking tour. You'll have the opportunity for tapas tastings in a traditional tasca and a pintxo bar. Pintxos (peen-chos) are the Basque version of tapas, and are epic in variety and taste. Your guide will also explain the ritual of the Bilbainos bar crawl, known as a txikiteo. (chicki-te-o). Basically it involves sampling several pintxos, washed down by txakoli (chah-kuh-lee), the local white or rosé wine.

At the Guggenheim, its entrance is guarded by an unlikely Cerberus; a 40ft dog made out of flowers. "Puppy" is the creation of kitsch American artist Jeff Koons and has become the unofficial mascot of the city. You may have to wait in line to have a photo taken of with the dog. The exhibitions vary during the year, but Richard Serra's seven-part The Matter of Time alone is worth a visit. 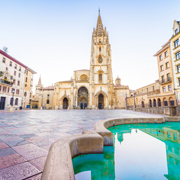 Bilbao to Oviedo:
Today enjoy a scenic drive hugging part of the coast and Parc Nacional before arriving in Oviedo. It's a fun, sophisticated city with an interesting historic quarter, as well as some excellent restaurants. The compact casco antiguo (old town) provides the opportunity to take in some of the most significant buildings, such as Santa Marí a del Naranco, San Miguel de Lillo and San Juliá n de los Prados, all of them national monuments. These temples and palaces, along with Santa Cristina de Lena, la Cà mara Santa and la Foncalada (a medieval fountain) have been given World Heritage status by UNESCO. Another old town site is the Iglisia de San Isidoro, a 16th century church overlooking the Plaza de la Constitució n. Two excellent choices for dinner is the Michelin-starred Gloria, offering traditional cuisine, or Naguar, more trendy and hip with a fusion influence. 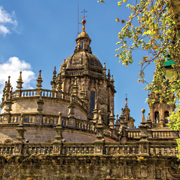 Oviedo to Santiago de Compostela:
After breakfast, begin driving west towards the Galicia region. There's no doubt that you are in a different kind of Spain, where old-timers speak a dialect called Gallego, and seafood not meat, bolsters the local diet. This is also the "Original Route" or Camino Primitivo. It was the first used to reach Santiago de Compostela, when in the 9th century most of Spain was under Moorish control. This was the route traditionally followed by pilgrims originating outside of northern Spain and Europe. So it will be no surprise to see pilgrims (peregrinos) walking along the road. The route crosses the Cantabrian Mountains, and includes the city of Lugo. If you have time, it's a perfect place for lunch. The old town is nested inside the only fully preserved Roman walls in Spain, and of course, a UNESCO World Heritage site.

After arriving in Santiago de Compostela, stroll around the pedestrian friendly streets before dinner. For being a pilgrimage site, it's surprisingly lively, no doubt due to the large number of university students. Time for dinner, and seafood lovers rejoice! Galicia is famed for its fresh and abundant seafood being caught in the rías (estuaries). Shellfish like mussels, clams, oysters, shrimp, crab, and lobster abound along with fish like tuna, monkfish, sea bass, and sole. The region is also known for their scallops, as it is one of the most important symbols of the pilgrimage to Santiago de Compostela. They are most commonly baked and eaten in their shells. Octopus, a regional specialty will usually be on the menu. Called pulpo gallego; it's a small, tapas-style dish of octopus dressed with olive oil and a sprinkling of pimentón de La Vera (smoked paprika) on top. 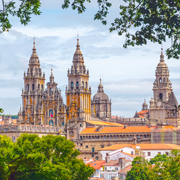 Santiago de Compostela:
After breakfast, your driver will meet you at your hotel for a full day private tour of Galicia's best known wine region, the Rias Baixas. This area lies just south of Santiago and borders the Atlantic Ocean. The Rias Baixas Wine Route is an invitation to discover the wineries and vineyards where it is produced, as well as its traditional architecture and gastronomy. You'll visit a country mansion winery, dated from the 17th century, as well as a traditional wine cellar. The principal grape is Albariñ o, which is aromatic with hints of citrus, and you'll have the opportunity to sample some of these wines, followed by a lunch at a traditional Galician restaurant.

Returning to Santiago, make time to visit the majestic cathedral; the end of the Camino and final resting place of St. James. A small church was first built over the tomb of St. James shortly after it was discovered in 819 AD. This was destroyed by Moorish army in 997, though they left the relics of the Apostle undisturbed. They did, however, force Santiago's citizens to carry the bells of the tower to the mosque in Cordoba (they have since been returned). Entrance to the cathedral is through the magnificent Pó rtico de la Gloria, carved in 1188 by Maestro Mateo and considered one of the finest works of medieval art. The spectacular Baroque facade of the cathedral, known as the Obradoiro facade, was added in 1738. Made of granite, it's flanked by the huge bell towers, and adorned everywhere with statues of St. James as the pilgrim, with his staff, broad hat and scallop-shell badge.

Depart:
After breakfast, return the rental car to the airport for your next Avanti destination!