Grisons - Switzerland off the Beaten Path (by Rail):
Zurich, Laax, Davos, Scuol, Celerina & Zermatt
Hike the gorgeous mountain valleys, marvel at the roaring rivers, and relax nearby the pristine mountain lakes of Switzerland's easternmost canton - Graubünden, otherwise known as Grisons. This scenic train journey will take you across Switzerland's largest canton, from the charming villages of Laax, Celerina, and Scuol to the glitzy and elegant resorts of Davos. Graubünden is full of adventure and culture while being far from the treaded path. Included is a ride aboard the famously scenic Glacier Express across 291 bridges, through 92 tunnels, and past multiple alpine glaciers, verdant mountain meadows, and vast forests. With three different languages spoken within the canton - German, Italian, and Romansh - Graubünden is steeped in diversity, both cultural and natural.
ACCOMMODATIONS
• 2 Nights Zurich
• 1 Night Laax
• 1 Night Davos
• 1 Night Scuol
• 2 Nights Celerina
• 1 Night Zermatt
INCLUSIONS
• Seat reservation on Glacier Express in 1st Class and 3-course meal
• Self-Guided Gornergrat Excursion
• Excursion to Uetliberg Mountain House with Fondue Dinner
• Discount on additional rail tickets (local transport) and some mountain excursions
• Daily Breakfast 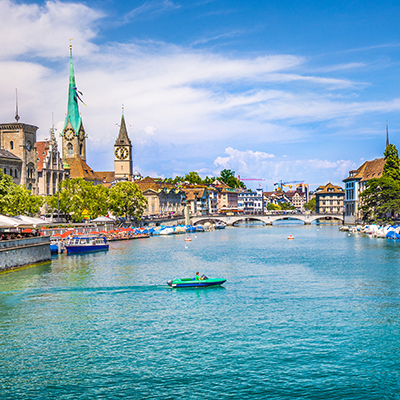 After arriving in Zurich by train or by plane, check-in to your hotel before taking time to explore the historic old town of Zurich. Switzerland's largest city gracefully balances modern Swiss sensibilities with its storied past and is hailed as one of the most liveable and attractive cities in the world. It's easy to see why - the diverse array of charming architecture built throughout history, its relaxing yet lively lakefront promenade, and opulent ambience evident in its world-class dining and museums. Zurich holds a special importance for the Swiss and especially for the German-speaking portions of the country, with a long history as one of the European centers of banking and finance, as well as being a deep tradition of opera and theatre that coexists alongside a cosmopolitan nightlife today. From its church spires to its chocolatiers or simply the view of the Alps across the lake, Zurich is not to be missed. 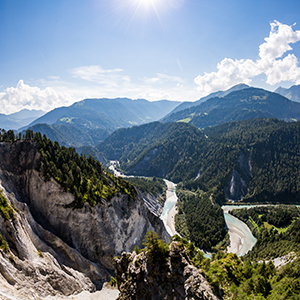 After breakfast, board your train for a scenic ride to Laax via Chur. The journey will take you along the pristine lakes Zurichsee, Obersee, and Walensee before venturing into the heart of the Alps surrounding Chur in the canton of Graubünden. Transfer trains in Chur in the direction of Laax, a mountain resort down deeper in this valley. Laax sits stately above the Rhine River Gorge and is a hotspot for hiking and skiing, with a bevy of ski slopes and hiking trails that cover the nearby mountains. Set beside a beautiful mountain lake and surrounded by forest, Laax is charming, quaint, and quintessentially Swiss. 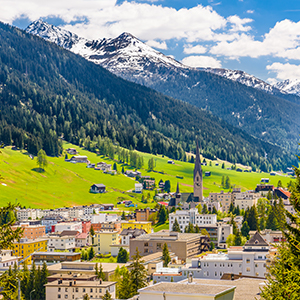 Laax to Davos:
After breakfast, board your next train from Laax to Davos for another ride through the jaw-dropping mountain valleys of Graubünden. Once in Davos, check-in at your hotel before enjoying the ambience of this international destination. This city has a rich legacy and is home Switzerland's largest alpine resort. Most famously, perhaps, the city hosts the annual World Economic Forum, bringing business people from all over the world to this wonderful city. Located in the Landwasser valley, Davos is abundant with ski slopes, hiking trails, restaurants, and more that are sure to keep your attention. 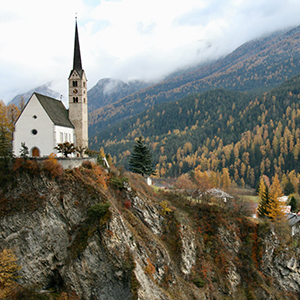 After breakfast, hop on the train from Davos to Scuol. The official language in Scuol is Romansh, a Romance language that is predominantly spoken in Graubünden. This town and the surrounding countryside is blessed with sunshine, dreamlike ski slopes, mineral-rich waters that flow in the city fountains, and convenient access to the nearby Swiss National Park. Scuol is home to more than twenty mineral springs, making this an ideal place to rejuvenate within a sauna or at Switzerland's first Roman-Irish or Turkish baths. Hike to the Gothic church of St. George to get a panoramic view of Scuol and the Swiss National Park.

After breakfast make your way to Celerina within the Engadin Valley by train. This town is neighbors with the famous resort town of St. Moritz but Celerina is a charming village in its own right that receives more sun than any other town within the Engadin Valley. Overlooking the town is the 14th century San Gian church, a timeworn symbol of this city. Ski slopes, mountain biking trails, and hiking paths can be found in nearly every direction here, making it a perfect destination for those seeking to find some peace and quiet within nature. 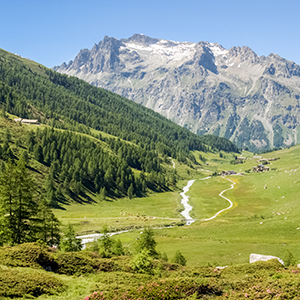 After breakfast enjoy a day trip to Sils-Maria and the Val Fex region further up the Engadin Valley. Sils-Maria rests between the alpine lakes of Lake Sils and Lake Silvaplana and is the gateway to the beloved Val Fex. This car-free valley is a hiker's paradise and has attracted everyone from David Bowie to Frederich Nietzche. Whether you explore it on foot or by horse-drawn carriage, you'll understand its allure firsthand! Return to Celerina in the evening and the rest of the night is at your leisure. 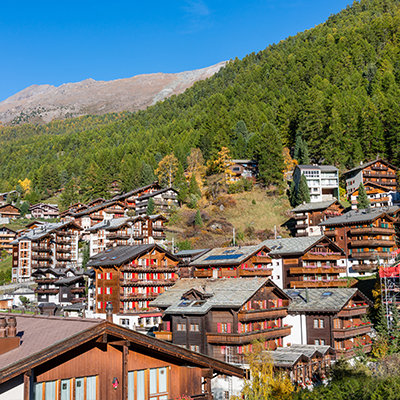 Celerina to Zermatt on the Glacier Express

After breakfast at your hotel, ride the train to nearby St. Mortiz on route to Zermatt aboard the famous Glacier Express. This 8-hour train ride, known as the slowest Express train ride in the world, is legendary for the spectacular scenery that it passes through along the deep Rhone valley, central Switzerland, the sunny Valais region with its glacier landscape, and the beautiful provinces of the South. Sit back and travel in comfort through the unspoiled natural landscape rich in ancient mountain forests, peaceful Alpine meadows, and rushing mountain streams. Your journey ends in Zermatt at the foot of the majestic Matterhorn. You'll be riding on this train in a 1st-Class seat, complete with panoramic windows, and dine upon a 3-course meal along the way. Check-in with your hotel in Zermatt where the rest of the evening will be at your leisure. 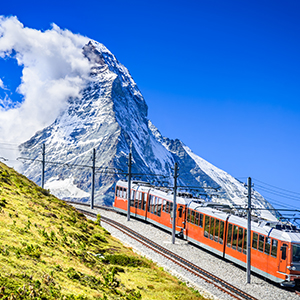 After breakfast at your hotel take a self-guided excursion to the Gornergrat, where the best views of the iconic Matterhorn await. Board the Gornergrat Railway, the highest open-air railway on the continent. On your way to Gornergrat, you'll reach an altitude of 10,135 feet above sea level, with a breathtaking mountain panorama overlooking 29 peaks over 13,125 feet high. Have your camera ready as the observation platform holds spectacular views of the Matterhorn that have to be seen to be believed. After returning to Zermatt, board your final train back to Zurich. In Zurich you'll treat yourself to an excursion to the mountaintop of Felsenegg where a fondue dinner awaits at the Uetliberg Mountain House. Enjoy a lavish traditional meal along with an incredible view of Zurich to cap off a spectacular journey through Switzerland.

After breakfast check-out of your hotel to either return to the Zurich Airport for the return trip home or onward to your next Avanti Destination!

(Breakfast, Zurich)
** Itinerary and inclusions are subject to change