Singapore Highlights
See Singapore by riding along the Singapore River on one of their iconic bumboats to Merlion Park where you`ll view the mythical symbol of Singapore and the surrounding architectural wonders around Marina Bay and later visit the impressive looking super trees at the Majestic Gardens!
ACCOMMODATIONS
• 3 Nights Singapore
INCLUSIONS
• Private Arrival & Departure Transfers
• Private Explore Singapore with Bumboat
• Private Majestic Gardens in the Lion City
• Daily Breakfast 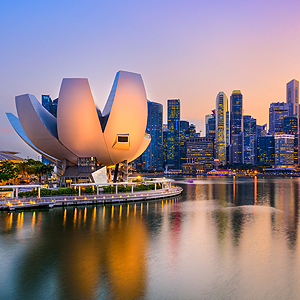 Upon arrival at Singapore Changi Airport and after you have collected your luggage, you will be met in the Arrivals Hall by your private driver who will transfer you to your hotel. 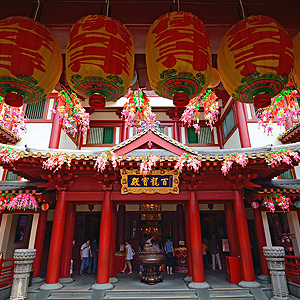 Your guide will pick you up at your hotel for your half-day tour which begins with a leisurely Bumboat ride along the Singapore River, a small river with great historical importance where Sir Stamford Raffles made the first trading port in Singapore. The ride ends at Merlion Park at Esplanade Bridge where you come face to face with Singapore's very own iconic Merlion, half fish-half lion spouting water from its mouth. Sweeping views from the Merlion Park across the expansive Marina Bay area are spectacular. You will marvel at the collection of architectural icons including the Marina Bay Sands Hotel, the structural masterpiece of visionary architect Moshe Safdie.

Your private tour continues with a drive around the Civic District past the Padang, Cricket Club, Parliament House, Supreme Court and City Hall. Next stop will be at one of the oldest and most important Hokkien (Holko) temples in Singapore, Thian Hock Keng Temple (Palace of Heavenly Happiness)—a temple to Mazu, a Chinese sea goddess. Your last stop will be at the National Orchid Garden, located in the central core of the Singapore Botanic Gardens, which boasts a colorful display of 60,000 orchid plants composed of 400 species. Transfer back to your hotel. 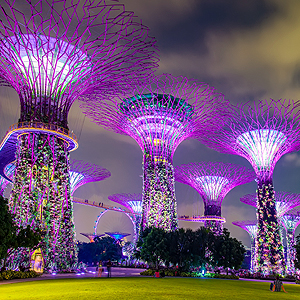 Your private driver and English-speaking guide will pick you up at your hotel for a half day tour of Singapore Majestic Gardens in the Lion City Tour.

One of the top places to visit in Asia, Gardens by the Bay spans over 100 hectares and is a highlight for any visitor to Singapore. Built at a cost of over one billion dollars, the gardens opened June 2012 and have already been billed as an unmissable attraction. The gardens house two climate controlled indoor glasshouses. The Flower Dome (the larger of the two) replicates the cool-dry climate of the Mediterranean and South Africa, whilst the Cloud Forest replicates a cool-moist climate found in Tropical Montane regions such as Mount Kinabalu in Sabah and high elevation areas in South America.

Within the gardens, there are also 18 impressive-looking Supertrees (tree-like structures), which are vertical gardens up to 164 feet tall and perform a multitude of functions. Along with providing a bird's eye view of the entire gardens, they also collect rainwater, generate solar power and act as vending ducts for the park s conservatory While there you will walk on an elevated walkway situated between two of the larger Supertrees where you will enjoy an impressive aerial view of the gardens. Transfer back to your hotel.

Your private driver will pick you up and transfer you to Singapore Changi Airport to continue to your next Avanti destination or to return home.