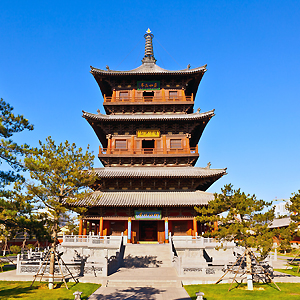 Arrival:
Upon arrival at Datong Rail Station, meet your English-speaking guide and begin your tour at the Yungang grottoes. Listed as a World Cultural Heritage Site, they are famous for their tremendous size, ancient history and their relatively complete state of preservation. You'll stop for lunch at a local restaurant before heading to Huayan Temple. Located just southwest of the city, it's one of the biggest temples in China built during the Liao Dynasty. It remains a major temple today of the Huayan sect, a sub-category of the Buddhism popular in northern China. Step back in time as you view the (3) nine-dragon walls in Datong. Built in 1392 during the reign of Hongwu of the Ming Dynasty, it's the largest and oldest of its kind in China. The wall was built as a screen to go in front of the emperor's mansion, and measures 147 feet long and 26 feet high. After your visit, you'll be transferred to your hotel for check-in, and the evening is at your leisure. 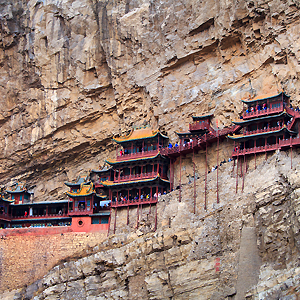 Datong to Pingyao:
After breakfast, you'll travel by private car to the ancient city, Pingyao; famous for its century old architecture. On your way, you'll have a tour of the Hanging Monastery. Located at the foot of the Mt. Hengshan, it's the only existing temple hosting worship for the Taoists, Confucians and Buddhists. Built in 491, the Hanging Monastery is an architectural wonder and derives its name from literally hanging on the west cliff of Jinxia Gorge; more than 50 meters (164 feet) above the ground. The monastery consists of over 40 buildings, evenly distributed and well-balanced in height. On the base of the natural hollows and outcrops along the contour of the cliff, many halls and pavilions were built, which are connected to each other by corridors, bridges, and boardwalks.

You'll stop at Yingxian to view the amazing Wooden Pagoda. This 11th century pagoda is the oldest and highest wooden structure in China. It's regarded as the 'First Pagoda in the World' and a gem in the architectural field. Built during the Liao Dynasty (about 1056), it has roughly 900 years of history. While appearing as a five-story structure, this unique structure actually has a total of nine stories with four hidden inside. It was built with over 50 different kinds of brackets, and jointed only by the tenors and mortises without any nails or rivets!

Afterwards you'll stop for lunch before continuing to the ornate Qiao Family's Compound. It displays the special characteristics of North China residences of the Qing Dynasty (1636-1911). Built in 1756. the compound has been renovated several times as well as enlarged to its current size. Later in the day, you'll arrive in Pingyao, and check into your hotel. Dinner will be on your own this evening. 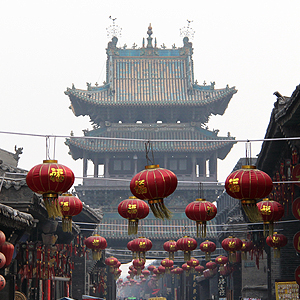 Pingyao:
After breakfast, meet your guide for a private full day tour of this historic Old Town and UNESCO World Heritage Site. The famous 600-year-old city wall was built during the reign of Emperor Hong Wu of the Ming Dynasty, and testifies to the profound influence of Confucianism in this region. His 72 best disciples are said to be represented by the 72 small watchtowers. You'll learn how the Old Town of Pingyao was constructed according to the traditional planning and building style of the Han ethnic group. Symmetrically arranged along an axis, there are four large streets, eight smaller ones, and 72 lanes making a neat grid. Today Pingyao still has 3,797 courtyard houses, more than 2,000 existing painted sculptures, as well as some richly decorated temples. Along the way, you'll stop for lunch at a local restaurant in the Mingqing Street area to sample Shanxi cuisine before resuming the tour. As you walk through the city, your guide will inform you about the city's past economic prosperity. It was the birthplace of the Jin merchants, and famous as the first bank in China. While Pingyao is longer prosperous through trade, walking through elegant courtyards, ancient towers and red-lantern-hung lanes makes this an unforgettable tour.

Departure:
After breakfast, meet your guide for a private transfer to the rail station for your train to Beijing or Xian, and on to your next Avanti Destination!