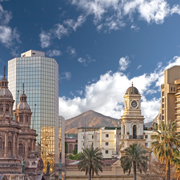 Arrive Santiago:
Airport greeting and transfer to your hotel. Free time to relax or explore on your own - easy using Santiago's extensive, safe metro system. This city of contrasts is surrounded by snow-capped mountain peaks and miles of vineyards. Check out the neighborhoods of Bellavista, Providencia, Lastarria, and Barrio Brasil for art galleries, cafes, shopping, restaurants and nightlife. Overnight Santiago. 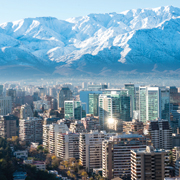 Santiago:
You are met at your hotel by a guide for a half-day private walking tour of central Santiago. Founded in 1541, Santiago is a fascinating combination of old and very new building styles. See the late 18th century La Moneda Presidential Palace, nearby Art Deco buildings from the 1930s, neoclassical National Congress, old Customs House (now the Pre-Columbian Art Museum), baroque Metropolitan Cathedral, National Historical Museum, Stock Exchange and Club de la Union. The city's oldest building is the 16th century San Francisco Church and monastery. Afternoon and evening on your own. Visit any of the museums you walked past on the tour, or try the Fashion Museum, Museo de la Chilenidad, featuring Chilean artists, the strikingly modern Museum of Visual Arts or the sobering Museum of Memory and Human Rights, which documents the repressive rule of the dictator Pinochet. Check out the hip Paris-Londres district - built in the 1920s to resemble both cities. Step back in time at Calle Concha y Toro, one of the oldest parts of the city. Or take the cable car or funicular up the hill of Cerro San Cristobal for a panoramic view of the city. Fans of the poet Pablo Neruda should go to La Chascona, his second house, built to resemble a ship interior and located in the Bellavista neighborhood. Good thing you have another day here - there's so much to see. Overnight Santiago. 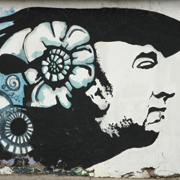 Santiago to Torres del Paine:
Transfer to the airport to fly to Punta Arenas. You are met at the Punta Arenas airport by a driver guide who will take you to your hotel of choice in Torres del Paine while providing information on this fascinating area enroute. 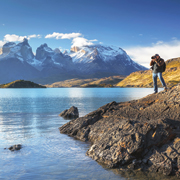 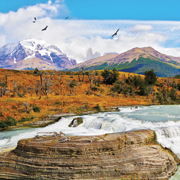 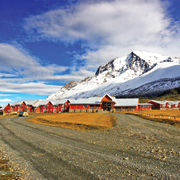 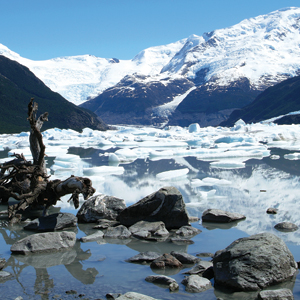 Torres del Paine to El Calafate:
There is regularly scheduled bus service (5 hours) between Puerto Natales and El Calafate and many properties offer the transfer on a shared or private basis. A picturesque town overlooking Lake Argentina, Calafate is the gateway to Glaciers National Park. The glaciers in this southernmost part of the Andes were formed more than 20,000 years ago. The Southern Patagonian ice field, shared by Chile and Argentina, is the world's largest outside of Antarctica. 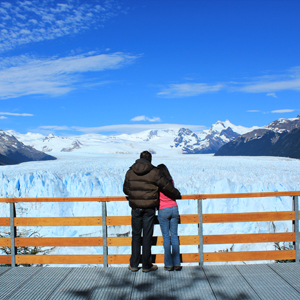 El Calafate:
Depart early morning for a full-day excursion (with lunch) to Perito Moreno glacier, which measures close to 20 miles long and some 200 feet high. While other glaciers are retreating, Moreno advances up to 2 meters (6.5 feet) every day. Against the backdrop of snow-covered Andean peaks, glaciers dazzle the eye with shades of blue and turquoise reflecting in the ice. You spend 3 hours on the glacier balconies and walking along pathways. Icebergs the size of buildings calve off the glacier's face. You've never seen anything like it. Late afternoon return to El Calafate and overnight. 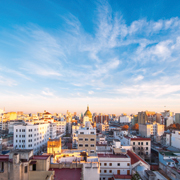 El Calafate to Buenos Aires:
Transfer to the airport for a 3 hr flight north to Buenos Aires, known as the "Paris of the South". You are met at the airport and transferred to your hotel. After several days spent contemplating a stark wilderness, the energy, sights and sounds of this vibrant, sophisticated city may come as quite a culture shock. Spend the afternoon and evening exploring on your own - it's a highly walkable city that combines Latin American passion with European influences - especially that of the many Italian immigrants. Traditional Argentine cuisine revolves around beef - check out a typical parilla (grill) - or the trendiest fusion cuisine. Nightclubs, bars and tango halls (milongas) abound. 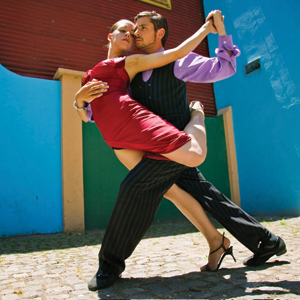 Buenos Aires:
Enjoy a half day city tour, learning about this cosmopolitan city influenced by the numerous immigrant populations which helped form it. The tour starts from the Plaza de Armas, founded in 1581 and today known as Plaza de Mayo, the historical, political and cultural center of the city. In its surrounding areas you can see Casa Rosada, the actual seat of Executive Power (Presidential Palace), the Cabinet, and the Metropolitan Cathedral. From the Plaza, go down Avenida de Mayo, one of the most interesting urban developments of the city with its variety of architectural styles, wide avenues and spacious green areas which balance out the vertiginous rhythm of the city. The tour continues all the way to the neighborhood of San Telmo, one of the oldest in the city, settled at the end of the XIX century by aristocratic families. This neighborhood, where every Sunday the antiques fair takes place around Plaza Dorrego, retains its great architectural heritage. Going further south, arrive at the picturesque and colorful port neighborhood of La Boca, with its famous street, Caminito, whose buildings and customs reflect the influence of European settlers that arrived at its shores during the XIX century and left their imprint not only in the multicolor houses still being used today but also in the cuisine of the typical cantinas. Followed by this comes the modern neighborhood of Puerto Madero, with its old piers converted into offices, apartments, places for entertainment and elegant restaurants. After the tour, return to your hotel. 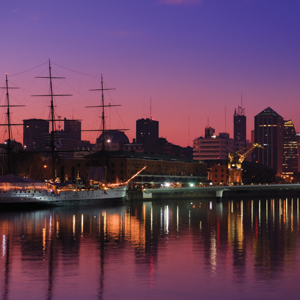 Buenos Aires:
Avanti has nearly 40 optional half-day and full-day tours in Buenos Aires, so whether your passion is tango, Evita, wine tasting, biking, shopping, museums, bars and cafes, artists' studios, Jewish heritage or a gaucho fiesta, you'll find plenty to see and do. Included with this vacation is a dinner and tango show at La Ventana. Overnight Buenos Aires.

Depart Buenos Aires:
Enjoy a private transfer from your hotel to the airport for your next Avanti destination.

(Breakfast, Buenos Aires)
** Itinerary and inclusions are subject to change