Myanmar Essentials:
Yangon, Bagan, & Mandalay
Go back in time to a more simple life! Many consider the Burmese people the most welcoming and engaging hosts in the world. Whether you're in the commercial hub of Yangon, exotic arts and crafts scene in Mandalay, or in a world removed in the temple town of Bagan, this vacation will give you a true taste of Myanmar and its cultures.
ACCOMMODATIONS
• 2 Nights Yangon
• 2 Nights Bagan
• 2 Nights Mandalay
INCLUSIONS
• Private Arrival & Departure
Transfers Per City
• Private Bagan City Tour
• Private Mandalay City Tour
• Private Yangon City Tour
• Daily Breakfast 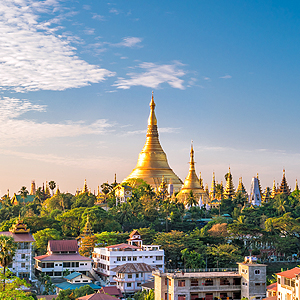 Upon arrival at Yangon International Airport and after you have collected your luggage, you will be met in the Arrivals Hall by your private guide and driver who will transfer you to your hotel.

Yangon lies in the fertile delta of southern Myanmar, on the wide Yangon River. The city is filled with tree-shaded boulevards, while shimmering stupas float above the treetops. The city became the capital only in 1885, when the British completed their conquest of Upper Myanmar and Mandalay's brief period as capital of the last Burmese kingdom ended. 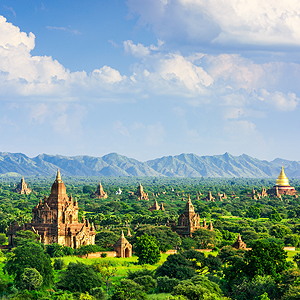 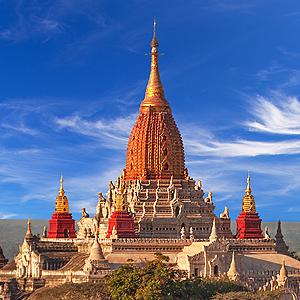 Bagan is a spectacular plain stretching away from the Ayeyarwady River, dotted with thousands of 800-year old temple ruins. Although human habitation at Bagan dates back almost to the beginning of the Christian era, Bagan only entered its golden period with the conquest of Thaton in 1057 AD.

After breakfast, your guide and driver will pick you up at your hotel for a private full day tour of Bagan with its many pagodas and temples. Shwezigon Paya was started by King Anawrahta to enshrine some relicts of Buddha and completed by his successor, King Kyanzittha between 1086 and 1090. Originally the Shwezigon Pagoda marked the northern end of the city of Bagan. The gold leaf — gilded stupa's graceful bell shape became a prototype for virtually all later stupas over Myanmar. Gubyaukhyi Temple at Wetkyi-Inn was built in the early 13th Century and repaired in 1468. The great colorful painting about the previous life of Buddha and the distinguished architecture make this temple an interesting site for a visit. This temple is not to be confounded with the Gubyaukgyi Temple in Myinkabe. Ananda Pahto is one of the finest, largest, best preserved and most revered of the Bagan temples. Thought to have been built around 1105 by King Kyanzittha, this perfectly proportioned temple heralds the stylistic end of the Early Bagan period and the beginning of the Middle period. The temple houses four standing Buddhas, each one facing the cardinal direction of East, North, West and South.

Gubyaukgyi Temple at Myinkaba was built in 1113 by Kyanzittha's son Rajakumar, this temple is famous for its well-preserved frescoes on its interior walls. The magnificent paintings date from the original construction of the temple and are considered to be the oldest original paintings in Bagan. Manuha Temple was built in 1059 by King Manuha, the King of Thaton, who was brought captive to Bagan by King Anawrahta. It enshrines the unusual combination of three seated and one reclining image buddha. It is said that this temple was built by Manuha to express his displeasure about his captivity in Bagan. Shwesandaw Paya was built in 1057 by King Anawrahta following his conquest of Thaton. This is the first monument in Bagan, which features stairways leading up from the square bottom terraces to the round base of the stupa.

The villages around Bagan are known for producing the finest lacquerware in Myanmar. Stop by one of the workshops and learn about the painstaking process dating back to the 1500's. Enjoy a panoramic view of the sun setting over the plain of Bagan from one of the pagoda platforms before returning to your hotel. 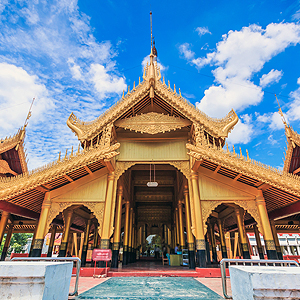 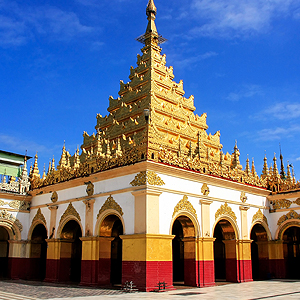 The last capital of royal Burma, Mandalay is still one of the largest cities in Myanmar and a cultural and spiritual center. Neighboring Sagaing is home to over sixty percent of the country's monks, while the artisans of Mandalay continue to turn out the finest crafts in Myanmar.

After breakfast, your guide and driver will pick you up at your hotel for a private full day tour of Mandalay.

You will head to Mahamuni Paya. The Mahamuni image enshrined here is perhaps the most venerated image in Myanmar, covered in over 15 cm of gold leaf. Worshippers flock daily to the shrine at four in the morning to observe the unique face-washing ceremony. En route to the pagoda you will stop to observe the laborious process of gold-leaf beating, where gold is painstakingly hammered into tissue-thin squares. Before breaking for lunch, you will visit a craft workshop specializing in one of the arts for which the city is famous: bronze-casting, marble-carving, wood-carving, or puppetry.

The afternoon's tour includes some of the city's most interesting temples and palaces. You will begin at Shwenandaw Kyaung also known as the Golden Teak Monastery. Built entirely of golden teak, this intricately carved wooden monastery was once part of the Mandalay Palace, used as private apartments by King Mindon and his chief queen. Continue to Kyauktawgyi Paya, famous for its monumental seated Buddha carved from a single block of marble, and the elegant Sandamuni Paya commissioned by King Mindon Min in 1874 as a memorial to his younger brother, Kanaung Mintha, who was assassinated along with three princes during the 1866 Myingun Prince rebellion.

Your visit continues on to the Kuthodaw Paya, surrounded by hundreds of stone tablets that comprise "the world's largest book". Miniature pavilions — 729 in all — each housing a slab of marble surround a central stupa. These slabs are inscribed with the entire Tripitkata, or Buddhist scriptures.

The final stop is Mandalay Hill, the natural watch-tower where many gather to marvel at the sunrise or sunset over the city and the Shwe Kyin Old Monastery, built at the base of Mandalay Hill during the period of King Mindon. At the southwest entrance to the hill you'll view the two immense lion statues standing guard of the holy hill. Return to your hotel. 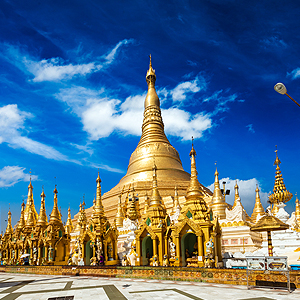 You will begin your private city tour at the National Museum to gain an insight into Myanmar. See the eight meter high Sihasana Lion Throne, used by the last Burmese king, and other fascinating artifacts from Burmese history and culture. Continue on to the Shwedagon Pagoda, the highlight of any visit to Yangon. Towering over the city, this pagoda is the most sacred spot in the country, built to house eight hair relics of the Buddha. The Shwedagon and surrounding shrines are at their most beautiful during the sunset hour, as the golden stupa reflects the changing colors of twilight. Return to your hotel.

Your private driver and guide will pick you up at your hotel and transfer you to the Yangon Airport to continue to your next Avanti destination!