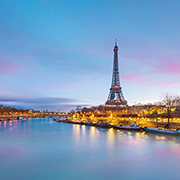 Arrive in Paris CDG Airport and meet your driver for a transfer to your centrally located hotel. After checking in, the remainder of the day is at your leisure to explore independently or just relax. Take advantage of your Paris Visite pass; good for Zones 1-3, it covers all major tourist sites by Metro, Bus, and RER. Wander around the Marais district or the old Jewish Quarter, now the trendiest part of the city. On the eastern fringe lies Place des Vosges, the oldest square in Paris and lined with galleries and restaurants. And this fashionable district is not just boutiques. You can visit Maison de Victor Hugo, where the author lived and wrote, as well as one of the more creative museums in Paris, the Musée Carnavalet. It traces the history of Paris using paintings and imaginative scale models. A short walk away is Musée Picasso, featuring approximately 5,000 works by Pablo Picasso, it also showcases works by Paul Cézanne, Edgar Degas and Henri Matisse.

Dinner is on your own this evening, and your options are unlimited, whether it's a haute cuisine restaurant or a simple bistro. If you have a specific restaurant in mind that you've been wanting to try, have your hotel make a reservation. You'll find that it's customary in all France, and more importantly, guarantees you a table this evening. 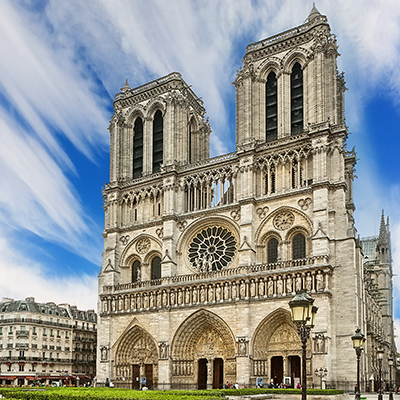 We walk as real Parisians through the medieval part of the Latin Quarter, a familial neighborhood famous for the high quality and large choice of food produce. The tour brings you through a market, then a cheese dairy, several bakers and confectioners, and finally a regional specialty shop. A walk rich in tastes and flavors, with a focus on family cuisine with tasting stops, to introduce you to the French gourmandise. The visit includes a tasting of foie gras, wine, cheese and bread.

In the afternoon, take advantage of your Paris Sightseeing Hop-on/Hop-off 48 Hour Ticket, which is valid for 2 consecutive days. You will be given your own headset upon boarding the double-decker (open-top) bus and there are 2 routes to utilize. The Classic Route has 9 stops before finishing at the Trocadero. You can get on and off as often as you please, and the entire route takes about 2 and 1/2 hours to complete. Some of the route stops include Tour Eiffel, Louvre, Arc de Triomphe, Notre Dame, Opera and Musee d'Orsay. 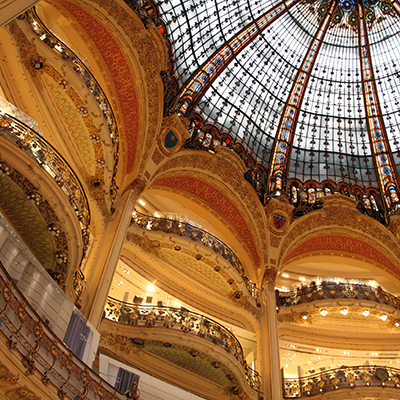 Today is free for independent exploring. Take advantage of your Visite Pass to explore sites that you missed, or perhaps return to some of yesterday's attractions to spend a little more time.

You can shop on Boulevard Haussmann in Galeries Lafayette or Printemps with real Belle Epoque grandeur, or cross over to he chic Left Bank with their numerous boutiques. Spend time in a couple of smaller art museums: the Orangerie in the Tuileries and Musee d'Orsay on the opposite side of the river. For history lovers, there's the Invalides, the military museum holding the tomb of Napoleon, and the much overlooked Pantheon. Some of France's best-known authors and scientists are interred in this former church including Voltaire, Curie, Braille, and Alexandre Dumas. While on the Left Bank and if the weather is nice, escape the noise and traffic at the Jardin des Plantes, one of the most beautiful botanical gardens. If you prefer an "outdoor museum", Père Lachaise Cemetery sits in the 20th arrondisement in the northeast area of Paris. Some of their more famous residents include Chopin, Moliere, Edith Piaf, Oscar Wilde, and of course, Jim Morrison of The Doors. 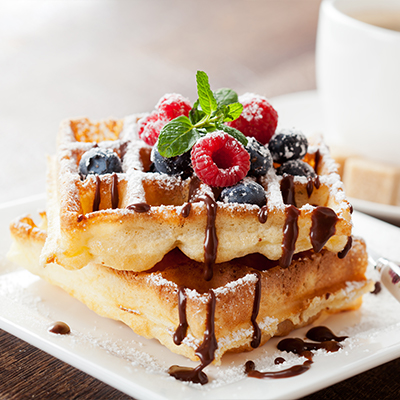 After breakfast, meet your driver in the hotel lobby for your private transfer to Gare du Nord You'll board the Thalys train in 1st Class for your 90 minute ride to Brussels-Midi Station. A driver will meet you upon arrival for a private transfer to your centrally located hotel.

The remainder of the day is at your leisure. Notice two bilingual signs (both in Dutch and French) on the streets of Brussels. Dutch is the official language of the Flemish region, the northern part of Belgium. While French is the official language of Brussels and to the west, you will hear both spoken. Explore your surroundings with a stroll to Grand Place (Grote Markt), the huge city square surrounded by historic 14th century buildings. A few blocks away is the iconic Manneken Pis; a landmark small bronze sculpture depicting a naked boy urinating... The statue remains the emblematic rebellious spirit of the City of Brussels and his wardrobe counts more than 900 suits. As you wander through the Old Quarter, take the opportunity to sample some of the famous local dishes. Have a Belgian beer (there are over 1500 to choose) along with "frites", (the original French fries), waffles, or the "unofficial national dish", mussels. 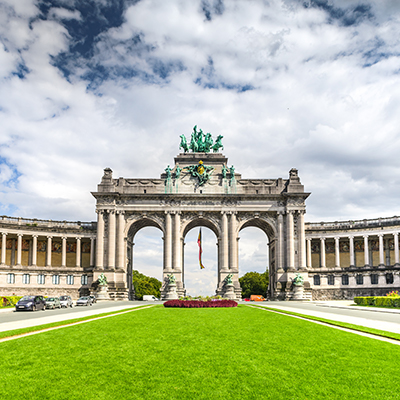 After breakfast, meet guide at the City Tour office, adjacent to the Grand Place for the Grand Tour. We'll begin with a short walk with your guide explaining the history of the city hall and the guild houses that surround it. We will continue by bus to see St Michael's Cathedral and the Heysel district, located in the Heysel district is the Atomium. It was built for the 1958 World's fair, and basically an iron molecule enlarged 165 billion times. The result: A five sphere monument with eight levels, featuring both permanent and alternating exhibitions of architecture and design. Nearby in the Laeken district is the Chinese Pavilion and Japanese Tower. (about 20-30 minute walk weather permitting from the Atomium.) It's a touch of the Far East in a very aesthetic setting, and visually stunning when everything is in bloom. home to the famous Atomium, as well as nearby Chinese Pavilion and the Japanese Gardens. Since we are in the heart of the European Union, we'll pass by several of the imposing EU buildings including the European Parliament. After stopping in the Cinquantenaire district with its Triumphal Arch, your tour will end at the Grand Place, and the remainder of the day is at your leisure. 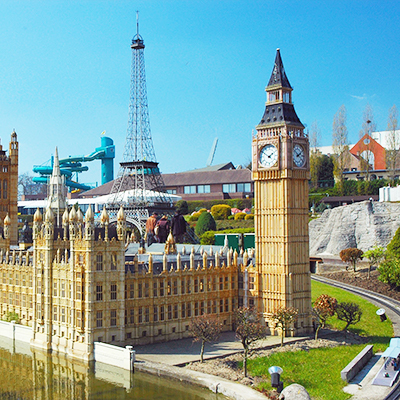 Today is free for independent sightseeing. Perhaps visit the Magritte museum. Magritte is arguably one of the 10 most famous painters in the world. If SalvadorDali is your cup of tea, you'll enjoy this Belgian's artistic flair. You'll find over 200 of his works at the Place Royale.

Can't make it to the UK or Italy? Located at the foot of the Atomium, Mini-Europe is the only park where you can have a whistle-stop tour around Europe in a few short hours. A truly unique and fun attraction where famous monuments like the Eiffel Tower and Big Ben are scaled down to miniatures. There's replicas of the Berlin Wall, the eruption of Vesuvius, and even a Thalys train that runs through to Paris. Another option is the Museum of Cocoa and Chocolate and it's conveniently right around the corner from Grand Place. Authentic Belgian chocolates are made with 100% cocoa butter and devoid of any vegetable oil. Henry Stanley (he of "Dr. Livingstone I presume"), was probably the most famous explorer to set foot in Africa. He established the (former) Belgian Congo in the late 1800's for King Leopold, hence Belgium's legendary tie-in with cocoa. And unlike many chocolates that you buy locally, their handmade chocolates contain a very limited amount of preservatives. Thus they need to be stored carefully away from extreme heat and consumed within approximately 21 days! Attention comic book lovers! Did you know that Belgium has more comic strip artists per square kilometre than any other country? Housed in a historic art-nouveau building, the Belgium Center for Comic Book Art is the home of Tin-Tin, and his creator; Herge. The City Museum (Maison du Roi) is dedicated to the history of Brussels, and if you have already seen the Manneken-Pis, in here you can take a look at his various costumes. The fascinating and sometimes turbulent history of Brussels is told over three floors from the Middle Ages to present.

The antique market in Place du Grand Sablon is worth perusing through the square for both the discerning antique lover and the casual window shopper. 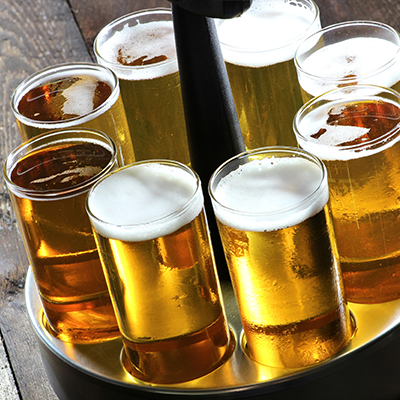 After breakfast, your driver will meet you in the lobby for your private transfer to the rail station. Board your Thalys train in 1st Class for the 2 hour journey to Cologne (Köln). You'll have a private transfer to your hotel and the remainder of the day is free to discover this venerable city. Located directly along the Rhine, it's the 4th largest city in Germany, and despite the almost complete destruction of the Inner City (Innenstadt) during World War II, Cologne has been painstakingly rebuilt.

The cathedral is the largest Gothic church in northern Europe. It was designated a UNESCO World Heritage site and the city's major landmark and unofficial symbol. It's diminutive stature is not only used as a point of orientation, but is the pride of the Cologne citizens. In addition to the magnificent cathedral, there are 3 museums that are noteworthy.

The Roman and Germanic Museum holds artifacts from the period of the migrations of the Germanic people and that of the Roman occupation. The Wallraf-Richartz-Museum houses fascinating medieval paintings and an important collection of Impressionist paintings, while the Museum Ludwig is home to the largest Pop Art collection outside of the USA.

Living up to its namesake, pay a visit to the House of Fragrances and sample the iconic brand, No. 4711. Their main fragrance, the Original Eau de Cologne (for both men & women), has been in production since 1799. In 1794, French troops occupied the city of Cologne and ordered all houses in the city to be assigned a unique number. This famous perfume company was assigned 4711, and the rest is history.

Dinner is on your own this evening and Old Town makes the ideal spot for dining. Visitors are drawn by its rustic narrow alleyways lined with traditional old houses, innumerable breweries, pubs and restaurants. Here you can enjoy a draft Kölsch beer or a crisp Riesling wine, to accompany regional favorites like sauerbraten, Wiener schnitzel or wurst. 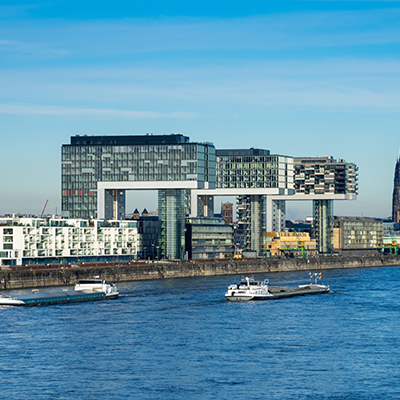 The morning is at your leisure before a 1 hour tour on the Rhine River. As guests on shipboard, you will have a panoramic view of Cologne's best tourist attractions, ranging from the picturesque historic city center to the ultramodern Rheinauhafen with its crane houses. Your trip begins at the Konrad-Adenauer-Ufer on the bank of the Rhine and goes past the Cathedral, the old town, the Chocolate Museum, the German Sports and Olympics Museum, along the length of the meadows in Poll, under four more Rhine bridges and finally... to the former fishing village of Rodenkirchen with its vast choice of culinary delights. On board, you'll learn why the Rhine has been a significant traffic artery for transporting goods to the city as well as popular route for river cruise tourism. Relax while you gently float along, enjoying a refreshing drink or just basking in the sun. After disembarking at the pier, you can return to your hotel or continue exploring the city on your own.

After breakfast, take your private transfer to the airport for your return flight home, or to your next Avanti destination!