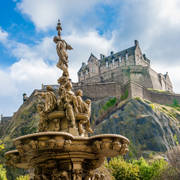 Arrive Edinburgh:
Arrive at Edinburgh, the bustling capital of a country with a rich history, and travel back in time through the atmospheric cobbled streets around the Royal Mile, where Claire and Jamie reunited after 20 years. Packed full of history, the buildings here have remained largely unchanged since the 16th century. Make your way to your hotel in Edinburgh. 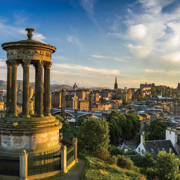 Edinburgh:
This morning, after a generous Scottish breakfast, explore Historic Edinburgh. Make your way to Edinburgh Castle, a mighty fortress sitting on top of Castle Hill and overlooking the entire city. Within the castle, you will have the opportunity to visit the National War Museum, an amazingly thorough source of inspiration about Scotland's dramatic past. Afterwards enjoy Afternoon Tea in the Castle's tea room. Later on you may wish to visit the National Museum of Scotland to explore the diversity of Scottish history. If time permits, walk the Royal Mile, from Edinburgh Castle to Holyrood Palace—the official residence of the Queen in Scotland. 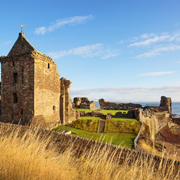 EDINBURGH TO STIRLING:
It is now time to leave Edinburgh and embark on your journey around Scotland. Pick up your rental car and make your way to West Lothian, where you will visit Blackness Castle, which features in the TV series as Fort William. Carry on to the lovely village of Falkland, which appears in the TV series as a stand-in for Inverness in the 1940s. In the afternoon, make your way to the historic burgh of Culross. You will find here the nearest thing to a 16th century time capsule anywhere in Scotland. At the end of the afternoon, you will arrive in Stirling, site of Stirling Castle—one of the largest and historically most important castles in Scotland, where several Scottish Kings and Queens were crowned. 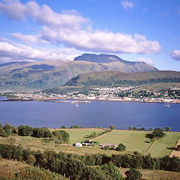 STIRLING TO FORT WILLIAM
Today, you will drive through the rugged landscapes of the Scottish Highlands. Your first stop will be at Doune Castle, otherwise known as the fictional Castle Leoch in the TV series. Carry on through the Trossachs National Park, on to the magnificent landscapes of Glencoe. Make your way to the Glenfinnan Monument. Set amidst superb Highland scenery, the monument is a tribute to the Jacobite clansmen who fought alongside Prince Charlie in 1745, in his unsuccessful attempt to restore the Stuart family to the throne of Great Britain. You'll stay tonight in Fort William, the second largest town in the Highlands. 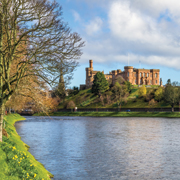 FORT WILLIAM TO INVERNESS
This morning, drive along the scenic route through the Great Glen, a straight valley that follows a major fault line for 62 miles. Take a short detour on to the road to Loch Garry, famous for its trout fishing. The western part of the loch, when seen from a lookout point, bears an uncanny resemblance to the map of Scotland. Admire scenic landscapes, great wildlife, glistening lochs and enchanting moorlands before heading to Loch Ness, a deep, narrow, and 23-mile long loch of great beauty. There, you will have the opportunity to explore the magnificent ruins of Urquhart Castle and—who knows?—perhaps spot the world-famous Loch Ness Monster. In the afternoon, you will be in Inverness, the capital of the Highlands. 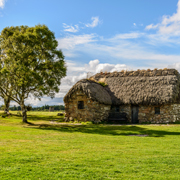 INVERNESS
Today, after breakfast, you will be at Culloden Battlefield. Soak up the rich history and haunting atmosphere of a land that has witness the key battle of the 1745-46 Jacobite uprising, where the English decisively defeated the forces of Bonnie Prince Charlie. This was the last pitched battle fought on British soil. In your search for the fictional Craigh na Dun, where Claire is being swept back in time, venture to Clava Cairns and experience the mythical atmosphere of 4,000-year old site. In the afternoon, wander through the clans' ancestral lands, to the unspoilt town of Beauly, home of the clan Mackenzie. Explore the ruins of the ancient Beauly Priory. Return to Inverness at the end of the afternoon. 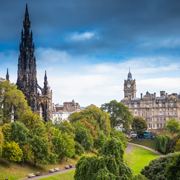 INVERNESS TO EDINBURGH AREA
This morning, delve into 18th century Scotland at the Highland Folk Museum, an open-air museum displaying 30 historic buildings, including a village of thatched roofed houses as they would have appeared in the 1700s. This living history site offers a unique insight into the life of Highland people. Continue through the Highlands on to Pitlochry and visit a whisky distillery (Edradour or similar) to learn about the age-old process of the making of the "water of life". "Slàinte", or good health, as you will of course be able to sample a lovely dram of Scotland's national drink. Carry on to Edinburgh. 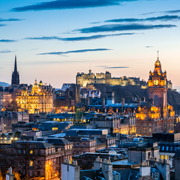 Departure:
After breakfast, drive to the Edinburgh airport (or train station) to drop off your rental car before continuing on to your next Avanti adventure!