Galapagos: Finch Bay Eco-Hotel
If you prefer an alternative to a cruise, charming Finch Bay Hotel is the perfect land-based option. It is located at Academy Bay on Santa Cruz Island, across the bay from the small town of Puerto Ayora. Named after the famous Darwin's Finches abundance in the nearby mangroves, the hotel is just steps away from a sandy beach. Daily excursions will be chosen from available options at hotel check-in, and vary depending on weather. Excursions are on average 3-4 miles and are divided into easy, moderate, and difficult options fit for differing levels of fitness and interest.
ACCOMMODATIONS
• 4 Nights Finch Bay Eco-Hotel
INCLUSIONS
• All Ground Transfers
• Galapagos National Park Fee
• 2 Full Day Yacht Explorations
• 1 Full Day Land Exploration
• All Meals 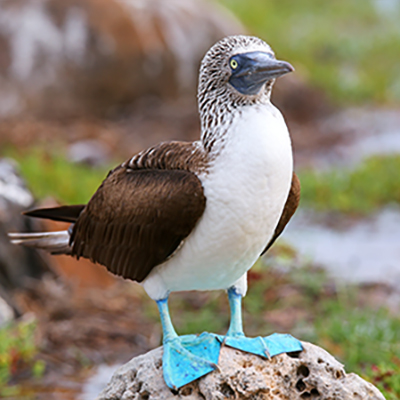 Arrive Santa Cruz Island - North Seymour Island:
Upon arrival, guests are met by the hotel naturalist guides and accompanied directly to the yacht. Welcomed by captain and staff, guests are briefed about safety issues as well as the National Park regulations. Lunch is served on board, while the yacht sails to North Seymour Island. North Seymour was lifted from the ocean floor by a seismic event, and its origins as a seabed give the island its low, flat profile. Cliffs only a few meters high form the shoreline, where swallow-tailed gulls sit among the ledges and rocks. A tiny forest of silvergrey Palo Santo trees stand just above the landing, usually without leaves, waiting for the rains to burst into bloom. This island is teaming with life! You might have to give way to a passing sea lion or marine iguana; blue-footed booby nests sit beside the trail where mating pairs perform their courtship dance. Further along, the rocky shore is interspersed with white sand, while large flocks of pelicans mass for a dive-bomb feeding-frenzy, painting a tableau from ages long past for us. The trail turns inland to reveal the largest nesting site in the Galapagos of the "magnificent frigate bird."" These huge, dark acrobats have two-meter (6-foot) wingspans, and males, with puffed up scarlet throat sacks, sit precariously perched in low bushes to watch over their equally large chicks. This is a walking excursion and involves uneven rocky terrain. Dry landing. After the visit, the yacht sails to Itabaca channel, from where we cross by bus faster over Santa Cruz Island to reach the south shore (42 km by bus is shorter and faster, than 50 km by boat), where the Finch Bay Hotel is located. Check-in and enjoy the glorious beach-front location and facilities. 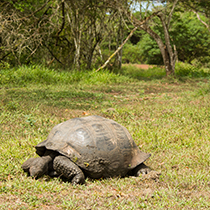 After a relaxed breakfast, our guests will leave Academy Bay by bus 15 km up to the lush highlands of Santa Cruz Island. From there a short drive across the farming area will lead us to El Manzanillo, a site recently opened to visitors at the northern edge of the Giant Tortoise Reserve. Manzanillo is on the natural path tortoises take every year as they either migrate to higher moist locations during the garúa season (June - September), or when they descend to the warmer lowlands during the wet season. Year round, tortoises can be seen grazing on the surrounding vegetation, or wallowing in muddy banks or in a small red-coloured pond (impressively colored by surface red pond-weeds). The area is teeming with life: chirping vegetarian-, small-tree, large-tree and woodpecker finches, mockingbirds and flycatchers, as well as ducks, herons and gallinules make this an exciting morning visit. Lunch is served in the cooler highlands, with the stunning views of Santa Cruz Island. After lunch, we visit a small farm, where coffee, sugar cane and cocoa beans are grown, harvested and prepared - all organic and sustainable. We have the chance to taste the products while learning about the artisanal way to burn island spirits! We then return to the hotel to enjoy the its pool, beach, or ask for suggestions for activities. 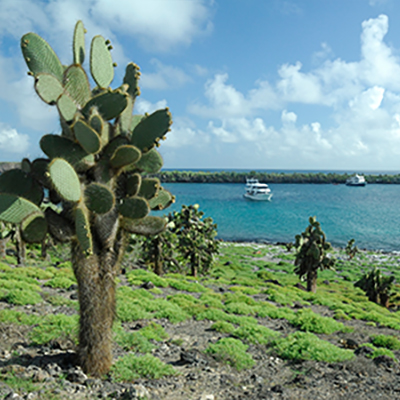 Santa Fe offers one of the more beautiful and sheltered coves in the archipelago. Its turquoise lagoon is protected by a peninsula of tiny islets forming an ideal anchorage. The island lies to the southeast of Santa Cruz within sight of Puerto Ayora. Like North Seymour, Santa Fe has been uplifted, and you can see where underwater lava once cooled off (pillow lava).

A wet landing on a sandy white beach brings us into contact with one of the many sea lion harems. Bulls vie for the right to be Beach Master, while smaller males masquerade as females and make stealthy mating moves. Galapagos hawks are often easily approached, perched atop salt bushes. The giant prickly pear cactus found here live up to their name, with tree-sized trunks! Our goal is to spot one of the large species of land iguana, native to Santa Fe. Beige to chocolate brown in color with dragon-like spines, these huge iguanas truly resemble dinosaurs. An indigenous species of rice rat also inhabits the thickets, and lucky hikers can spot harmless Galapagos snakes. After the hike, there is nothing more inviting than a swim in the calm waters of the bay, a great snorkeling opportunity with diverse marine life. 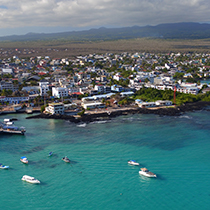 This is the magic of Galapagos: a short distance away from Academy Bay and the bustle of Puerto Ayora, lies the quiet and wildlife-rich Divine Bay. Named after one of the islands first settlers, this cove is protected from the swells by natural volcanic reefs on one side, by a gallery of mangrove trees on the other and cliffs created eons ago by the uplift of the lava plateau. The whole provides a wonderful natural shelter for wildlife. Every morning, hundreds of herons cross Divine Bay on their daily foraging trips, to return before sunset to perch amid the trees. Noddy terns use the natural burrows in the cliffs for nesting, while Galapagos brown pelicans prefer the evergreen mangroves, under the watchful eye of non-breeding blue footed boobies perched along the cliffs. Beneath the sea, sea turtles graze on sea weed, hundreds of reef fish species swim about the lava crevices, and young reef sharks and rays employ the brackish streams as havens from large predators while they mature.

We can explore this lovely cove by boat while more adventurous guests could take the tandem, sit-on-top kayaks straight from the hotel's beachfront. The morning's visit includes snorkeling on a calm, but active, sector of the cove. This is next to a wooden dock we use to explore Punta Estrada. A dry landing and a short walk (0.5 km) will lead us to the south shore of the island, to a small beach called "Playa de los Perros" (Dog Beach). This is a great place to see intertidal organisms and learn about marine iguanas in their nesting sites. Also, there's a nearby natural terrace from where young white tipped reef sharks can be observed from above as they swim about the lava crevices. After this morning's visit we return to the Finch Bay Hotel for lunch. Afternoon visit to the Charles Darwin Research Station and the giant tortoise breeding programme, with time to enjoy the town, or the hotel's facilities.

After breakfast, check out and transfer to Baltra Airport for your flight back to the mainland. Connect to your international flight home, or on to your next Avanti destination.

(Breakfast, Finch Bay)
** Itinerary and inclusions are subject to change