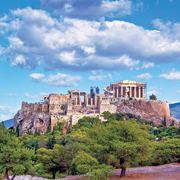 Arrive Athens:
Arrive in Athens. Transfer to your hotel with a meet and greet at the airport. Check in to your hotel for two nights. As the original metropolis of western civilization, Athens is a fascinating blend of old and new. Spend some time walking around to sample the sights and sounds of this ancient city. 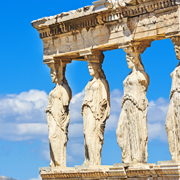 Athens:
After breakfast you will take a tour.

Athens Sightseeing Tour
The striking contrast between breathtaking monuments of a glorious past and modern, elegant structures of the present is what you will enjoy during your tour of Athens. Visit the Acropolis, the crowning beauty and glory of Ancient Athens, with its many monuments atop its rocky plateau, including the awesome Parthenon, the Propylea, the temple of Athena Nike and the Erechtheion, with its Porch of Maidens. Drive to the Roman Temple of Olympic Zeus, the Panathinaikon Stadium (site of the first modern Olympic Games in 1896), the Tomb of the Unknown Soldier in front of the Parliament House on Constitution Square. See views of government buildings and elegant structures of the 19th century. Drive along Panepistimiou Avenue and view the Catholic Cathedral, the Academy, University, National Library. In contrast, conclude your tour with a visit to the new Acropolis museum, a marvel of contemporary architecture with a full exhibition of the glory of Ancient Athens. The Acropolis Museum is closed on Mondays.

This evening, arrive on your own for dinner at Kuzina Restaurant where the food is perfectly coupled with the environment in a very inspired mixture of modern and traditional Greek elements. The interior space is dominated by the white color and the intense rustic elements, while the open kitchen awakes Greek traditional memories offering a relaxed and friendly atmosphere. The menu changes throughout the year but some examples are Dumplings (with feta cheese, sundried tomatoes, and pomegranate sauce) and Grilled Chicken (with proscuitto ham, cherry tomatoes, smoked sheese from vermio and sage). 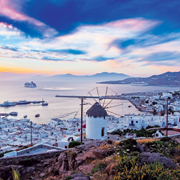 Depart Athens:
After breakfast, you will be transferred to the port where you will board the cruise ship which will be your home for the next four days and nights. Your first stop will be the picturesque island of Mykonos, with its dazzling whitewashed houses and bluedomed churches. An island famous for its wild nightlife and its beaches, a cosmopolitan paradise with exquisite boutiques and fine dining that attracts celebrities, artists and socialites from all over the world. 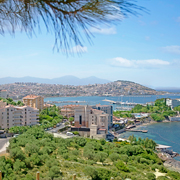 On the Aegean Sea:
Leaving Mykonos at midnight you'll cruise across the Aegean to the interesting port city of Kusadasi, Turkey. Kusadasi is a beach resort in Turkey famous for its marina and its colorful bazaar where visitors can find a wide selection of hand-made carpets, leather bags and local products. Just outside Kusadasi, set out on a historic journey to the 3000 years old city of Ephesus, one of the largest Roman archeological sites on the Mediterranean. An important trading hub during its time, it has left its mark on Greek and Turkish cultures, as well as on the Christian faith with the presence of the apostles Paul and John, along with Virgin Mary. Patmos is a beautiful verdant island, where Saint John the Evangelist wrote the book of Revelations in a mountainside Grotto, after hearing the voice of God. Atop its highest hill, within the halls of Hora stands the monastery founded in his honor in 1088. This island apart from its great significance to Christians all over the world, is now turning into a cosmopolitan destination. 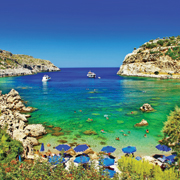 On the Aegean Sea:
Rhodes will make you think you've stepped back in time. A peaceful island packed with cultural delights, it masterfully balances leisure and culture into one gorgeous destination. Centuries of culture and history engrained in the ancient walls, from the Acropolis of Lindos, set high above the sea, to the Citadel of the Knights. Follow the footsteps of heroes along Knight in old town Rhodes and admire the seven lodges of the Order, still bearing their coat of arms. 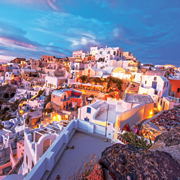 On the Aegean Sea:
Heraklion, the capital of Crete, is a former Venetian harbor with representative architecture and art and an Archaeological museum with invaluable treasures. The city is just a short drive to the Minoan Palace of Knossos, home to Europe's oldest civilization. If you are not into sightseeing, walk the city center where you can dine or shop.

Santorini is one of the most renowned places of the world. People travel thousands of miles in order to admire its unique geography, result of an earthquake that took place many centuries ago. Take a jeep safari into the interior, cruise to Santorini's smaller islands and volcanoes, visit the Akrotiri excavations or drink coffee at Oia Village, 300 meters above the sea. 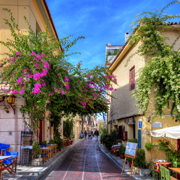 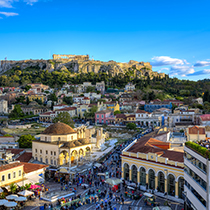 Depart Athens:
After breakfast, continue on to your next Avanti destination!