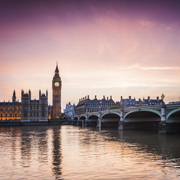 Arrive London:
After clearing customs at the airport your driver will meet you in the arrivals hall for your private transfer to your hotel. Your accommodations are at the 4-Star St Ermin's Hotel, a beautifully restored Edwardian building located in central London. Rest of your day at leisure to explore using your London Oyster Card and London TripBuilder City Guide.

London:
You will be picked you up at your hotel for your private tour of London. Enjoy the sights and sounds of London's main attractions from the luxury of your own private car and capitalize on the knowledge and experience of a professional driver guide. Options include driving through Parliament Square, past Westminster Abbey, Big Ben and The Houses of Parliament, Whitehall and Trafalgar Square. Also visit the Old Square Mile, the original settlement still known as the City of London and home to St Paul's Cathedral, Tower Bridge and the Tower of London. You can decide where you'd like to go, or you can leave the itinerary to the expertise of your driver guide. Return to your hotel to relax and enjoy St. Ermin's delicious and stylish afternoon tea served in The Library or on the outdoor terrace during the summer months. 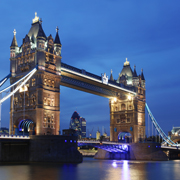 London:
Enjoy a day at Leisure in London. Use your London Oyster Card and TripBuilder to explore famous museums such as the National Gallery at Trafalgar Square - founded in 1824 housing a collection of over 2,300 paintings dating from the mid-13th century to 1900; the British Museum with its collections of artefacts representing the cultures of the world, ancient and modern; or stroll across the Thames on the Millennium Bridge and visit the Tate Modern, one of the largest museums of modern and contemporary art in the world. Explore Covent Gardens and the West End with its music and restaurants or the iconic turreted Tower Bridge and the Tower of London with its display of the Crown Jewels. Or you might want to book an optional experience such as the London Eye, The View from the Shard or a London at Night tour. 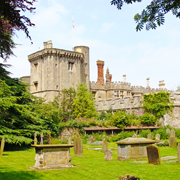 London to Cotswolds:
Your driver guide will pick you up and head west to the Cotswolds an area in south central England, with a range of rolling hills. The area is defined by the bedrock of Jurassic limestone that creates a type of grassland habitat rare in the UK and is quarried for the golden colored Cotswold stone. The rural landscape contains stone-built villages, historical towns and stately homes and gardens. Locations within the Oxfordshire Cotswolds have featured prominently in the popular TV drama Downton Abbey, particularly Highclere Castle and Bampton, which doubled as the fictional village of Downton.

Your accommodations are at the Thornbury Castle which once housed Henry VIII and his new bride, Anne Boleyn. Construction of the castle commenced in 1508 by Edward Stafford 3rd Duke of Buckingham. In 1521, when he was convicted of high treason and executed, Henry VIII appropriated the castle. Returned to the descendants of the late Duke in 1554, the castle was unoccupied for two centuries and fell into ruin. In the 1850s the castle became once more a family residence. Thornbury Castle's dining room features a delectable range of traditional fare or more contemporary cuisine with an international flavor. For hundreds of years, the kitchen garden has provided fresh and flavorsome vegetables, edible flowers and seasonal fruits for use by their chefs. You might choose to book a special wine dinner in their dungeon wine cellar. 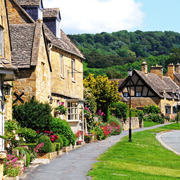 Cotswolds:
After breakfast, you will depart with your driving guide on your private daylong tour through the heart of the Cotswolds. First stop will be in Bath, known for its natural hot springs and 18th-century Georgian architecture. Honey-colored Bath stone has been used extensively in the town's architecture, including at Bath Abbey, noted for its fan-vaulting, tower and large stained-glass windows. You'll explore the Roman Baths and the museum, including The Great Bath, statues and a temple. People have been visiting Bath since the time of the Celts. Later the hot water was utilized by the Romans in the 1st century AD when they called this place Aqua Sulis. Later in the Georgian Era of the 18th century, the rich and wealthy arrived from London to "see and be seen". They too took the waters to rid themselves of stiffness of the joints and gout. An elegant city of squares, crescents, terraces and circuses grew up around the baths.

A short drive takes you to Corsham, a historic market town and civil parish in west Wiltshire. Historically a center for agriculture and later the wool industry, Corsham remains a center for quarrying Bath Stone. It contains several notable historic buildings, such as the stately home of Corsham Court. During the Second World War and the Cold War, it became a major administrative and manufacturing center for the Ministry of Defence, with their numerous establishments both above ground and in the old quarry tunnels. The early 21st century saw growth in their role in the film industry.

Your last stop for the day will be in the delightful village of Lacock. Untouched by modern hands this charming place has been used in many films such as Cranford, Moll Flanders, Pride and Prejudice and Harry Potter. Return to Thornbury Castle for overnight. 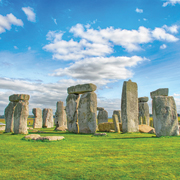 Cotswolds:
Departing Thornbury after breakfast, your driving guide will take you on a lovely drive through chalk down land, passing thatched cottages and charming villages on your way to the Salisbury Plain. You'll arrive at the mysterious monument known as Stonehenge where your guide will tell you the facts and theories behind this most famous of Stone Age structures. You'll learn of what is known and what might never be known as you tour this powerful location. A temple, a clock, place of worship, burial site for the elite? Stonehenge's ring of standing stones are set within earthworks in the middle of the most dense complex of Neolithic and Bronze Age monuments in England, including several hundred burial mounds. Archaeologists believe it was constructed from 3000 BC to 2000 BC. One of the most famous landmarks in the UK, Stonehenge is regarded as a British cultural icon. It has been a legally protected Scheduled Ancient Monument since 1882 when legislation to protect historic monuments was first successfully introduced in Britain. The site and its surroundings were added to UNESCO's list of World Heritage Sites in 1986.

Leaving Stonehenge, you'll make your way to Salisbury located in the southeast of Wiltshire. Construction of Salisbury cathedral began in 1221 and is considered a masterpiece of Early English architecture. The spire's large clock was installed in 1386, the oldest surviving mechanical clock in the world. The Cathedral also contains the best-preserved of the four surviving copies of the Magna Carta. The Salisbury Museum, housed in The King's House whose history dates back to the 13th century, is across from the west front of the cathedral. Their permanent Stonehenge exhibition gallery has interactive displays about Stonehenge and the archaeology of south Wiltshire.

Departing Salisbury, you'll head east to London where you will be dropped off at the end of the day. Spending the night at a London or Heathrow hotel is recommended.