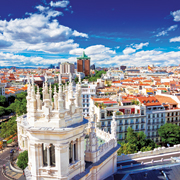 Arrive Madrid:
Welcome to beautiful Madrid! Enjoy your private transfer from the Madrid airport to your hotel. 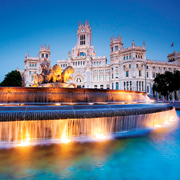 Madrid:
After breakfast at your hotel, start the day with a panoramic driving tour of Madrid. Madrid, Spain's capital, is now a cosmopolitan city. The Madrid area has been settled since the Lower Paleolithic age, but it was not until 1561 that King Philip II made it the capital of his mighty empire. The historic old town, also known as "Madrid de las Austrias" (referring to the Hapsburg Empire) is an example of the city's 16th and 17th century life, as is its impressive Plaza Mayor. The afternoon is free for you to explore the city at your leisure before enjoying a 3-course dinner at a local restaurant.

Madrid:
After breakfast, enjoy the day at leisure, or take an optional tour. 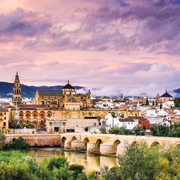 Madrid to Cordoba:
After breakfast in your hotel, meet your driver in the hotel lobby for your private transfer to the Atocha rail station, where you'll catch your train to Cordoba. This was an important city in Roman times and later the capital of the Arabic Caliphate which comprised almost all of the Iberian Peninsula. In the tenth century Cordoba was the largest city in Europe. Rich in architecture, explore this city on a twohour walking tour with a local guide in the afternoon. 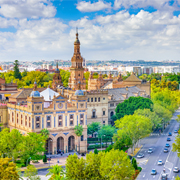 Cordoba to Seville:
After breakfast at your hotel, you have free time until your train departs for Seville. Please arrange your own transfer to the train station, and also from the Seville train station to your hotel. 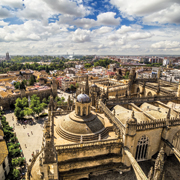 Seville:
After breakfast at your hotel, you have a Seville City Sightseeing Tour, with your afternoon at leisure, followed by a Flamenco Show and dinner in the evening.

Arrive on your own for your Hop-on/Hop-off Seville City Sightseeing Tour at Torre del Oro, to experience the historical masterpiece that is Seville with it Moorish monuments, gardens, Flamenco festivals, Museum of Fine Arts, medieval Jewish quarter and so much more. Best of all, you can hop-on and hop-off at the major points of interest over a 24-hour period. In the evening, enjoy a Flamenco Show with Dinner. Flamenco is a vibrant mixture of dance, song and guitar that has evolved alongside the contrasting historic influences of Arabic, Jewish and Gypsy cultures. Feel the vibes of Spanish dancing run through your veins while you enjoy your dinner. 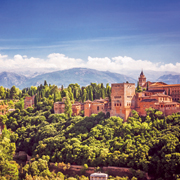 Seville to Granada:
After breakfast at your hotel, go to the train station on your own for your first-class rail to Granada, a strikingly beautiful city set at the foot of the Sierra Nevada mountains and at the confluence of four rivers. Granada is most famous as the location of the Alhambra, a 1000-year-old Moorish palace of stunning architecture and art - one of the world's great buildings and a UNESCO heritage site. Granada's cathedral is a mixture of Gothic, Renaissance and Baroque elements. 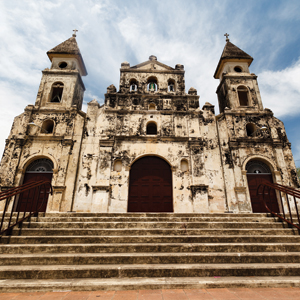 Granada:
Today you will have a tour of the most visited site in Spain, the famous Alhambra Palace. Along with your private guide, explore the gardens and yards, like the Partal or the Generalife Gardens, the fortress and the dungeons and, of course, the palaces of the sultans, like the Palace of the Lions or the Palace of the Throne.

See the magnificent Moorish architecture of the Nasrid palaces and gain a glimpse into the decadent sultans who once inhabited the opulent structure. You`ll feel the atmosphere of the Moorish culture surrounded by the perfumes of the flowers and the murmuring of the water. 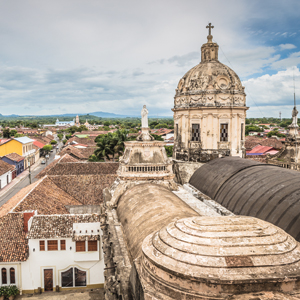 Depart Granada:
After breakfast at your hotel, head for the train station or airport for your next Avanti adventure, or to return home.