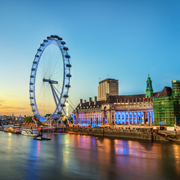 Arrival:
Arriving in London, you'll be met and take a private transfer to your centrally located hotel. After checking in, the rest of your day is at your leisure to rest or explore. This is a great opportunity to make use of your London TripBuilder Guidebook and the London Oyster Card to get your bearings and explore the city on the Tube or bus. Explore the bohemian neighborhood of Notting Hill, have dinner in lively Soho, or maybe take in a play or musical in London's theater district. 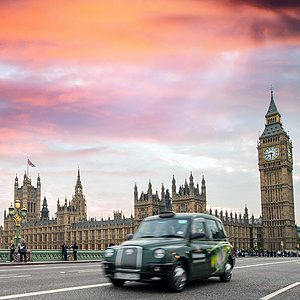 London:
After breakfast meet your driver and guide in the iconic Black Taxi. These private tours are all driven by knowledgeable guides who share the best of the city with their own personal twist and perspective. Maximize your sightseeing opportunities on this 3-hour tour seeing the most iconic London sights tailored precisely to your tastes. Visit the famous Houses of Parliament and St. Paul's Cathedral or see the legendary rock 'n' roll venues that birthed stars and the sights made famous by Harry Potter in a private Black Taxi. Once your tour is finished, you'll have time to visit many other attractions in the city — maybe a walk through the bustling Borough Market, the famous Abbey Road, or stop at a quintessentially British pub to relax with a pint. 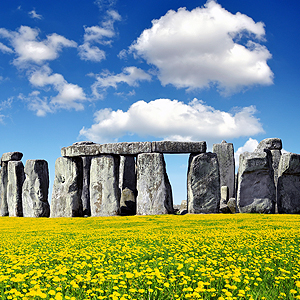 London:
For your last day in the UK, get out of the city and experience the essence of the English countryside. Explore England's history by visiting Windsor, Bath, and Stonehenge on a small group tour led by knowledgeable guides. By operating the tour in the opposite direction of the other coach tours, this particular group tour gives visitors the chance to see the famous sights before the crowds arrive.

Begin the trip by travelling through Wessex on route to Stonehenge, the famously mysterious Neolithic monument. Learn of the people who may have worshipped there and the various theories behind the use of these millennia-old stones. Then head west towards the city of Bath, a centuries-old city that has been popular due to its multiple hot springs — the only hot springs in the country. Originally founded by the Romans, the city was reinvigorated during the 18th century and became popular with the London elite. The fully guided tour of Bath includes admission to the Roman Baths museum and a tour of the Georgian Bath, including the Royal Circus, Assembly Rooms, and Pulteney Bridge. Depart from Bath along the edge of the Cotswolds towards *Windsor Castle, the largest and oldest occupied castle in the world. See the town before visiting the lavishly decorated castle itself. Finally, return to London to relax after a fulfilling day of exploration and history.

*Entrance fee to Windsor Castle is not included in the tour price and may be purchased on arrival if desired. 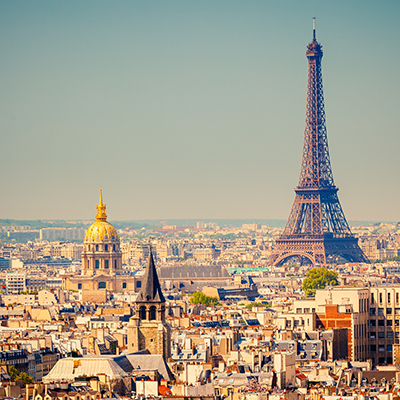 London to Paris:
Upon waking up, enjoy breakfast before departing to Paris via a 1st class seat on the Eurostar Train. You'll clear customs and pass through security for your 2-hour rail journey to Paris. Arriving at Gare du Nord station and checking in, the rest of your day is at your leisure to rest or explore the city. This is a good time to make use of your Paris TripBuilder Guidebook and Paris Visite Pass. Your Paris Visite pass becomes valid from the first use. Activate it when it's convenient for your schedule. The entire day is billed towards the duration time so it's best to activate the pass early in the day. (NOTE: The Metro operates from 5:30am to about 1:00am)

The pass for Zones 1-3 includes travel within central Paris including stops near all major tourist sites however, it does NOT include entrance fees. Dinner is on your own, whether it's haute cuisine or a charming bistro. Be sure to look at the menus posted at restaurants around town and have your hotel make a reservation for you, as not only do the French prefer that, it also guarantees you a table. 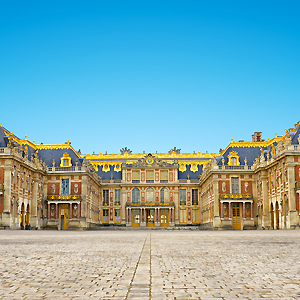 Paris:
Explore 2000 years of French history, art, and architecture on this customizable, private, and guided tour through Paris and Versailles! See the story of this legendary city through the evolution of its architecture, from the ancient Lutetia to the modern Paris. This complete overview of the city can be personally tailored however you wish, whether that means a first-time visitor wants to see the major sites or a seasoned traveler who wants to see the oft-hidden side of Paris. Afterwards be amazed by a private guided tour inside Versailles, one of France's most well known artistic and architectural achievements. Your guide will illuminate the history of Versailles and the Sun King, Louis XIV, whose magnificent palace with its chateaux, gardens, and parks made him the envy of Europe. The tour will include "skip the line" entrance fees and a reservation to the Versailles State Apartments, the Hall of Mirrors, and the gardens. After your visit, return to Paris and your hotel and spend the evening at your leisure. 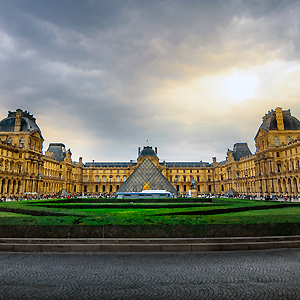 Paris:
After breakfast, indulge in quintessential French cuisine: wine and cheese! Join an accomplished and English-speaking French sommelier, beginning with a flute of Champagne before you're guided through a bespoke tasting lunch. Learn first-hand about the French techniques of food and wine pairing, leaving with a better understanding of France's appreciation for wine, its wine regions, and the people's relationship with food. *Lunch includes a plate of saucisson (dry cured sausage), artisanal cheeses, and a selection of French breads. You will taste 5 French wines (red + white) including a champagne. Enjoy the following French cheeses: a Cantal, a Saint Nectaire, a Chevre, a Roquefort, a Comte, a Brie and a Saint-Félicien (similar to a Saint Marcelin). After lunch, spend your last afternoon in Paris visiting museums or sights you might have missed, relax in the hotel, or go in search of more delicious food!

*Food & wine selection could change (slightly) based on availability. 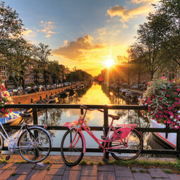 Paris to Amsterdam:
Enjoy breakfast before departing from Gare du Nord station for a high-speed rail trip to Amsterdam in 1st class. After arriving in Amsterdam, meet with your private transfer on route to your centrally located hotel in Amsterdam. The remainder of the day is free for you to explore this lovely city at your leisure. Amsterdam has an excellent network of trams, canal busses, and more to get travelers around the city. 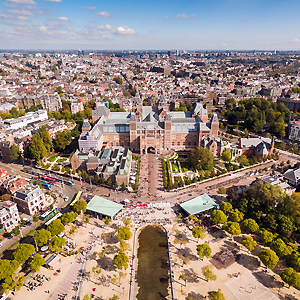 Amsterdam:
After breakfast, begin your private tour of Amsterdam with a guide via car. This quick tour only takes 2 hours and is a perfect way for visitors to get their bearings and see some of the most famous sights quickly. Stop at Dam Square, Museum Square, Leidse Square, the Skinny Bridge, walk amidst the canals, and much more. After the tour, the rest of the day is yours to enjoy! With your bearings now set, it's time to explore Amsterdam! Pay respects at the Anne Frank House Museum, find a cozy café, or head to the Leidseplein at nighttime — whatever you want, Amsterdam has the place for you. 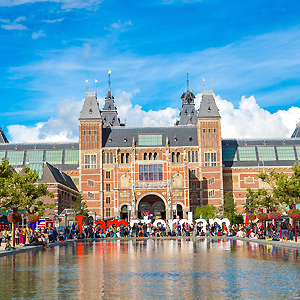 Amsterdam:
With your Rijksmuseum Ticket and Canal Bus Day Pass*, it's time to see Amsterdam from the water and through the frame. The Canal Bus is a fun and easy way to traverse the canals of Amsterdam, as the canal busses operate regularly along four routes with on board commentary about the city. Hop on and hop off as often as you like, as a Day Pass is valid for 24 hours. In addition, your Rijksmuseum Ticket** allows you to bypass the line into this famous museum. Here you'll find works by the Dutch Masters, Ruisdael, Vermeer, Rembrandt, and many more. Afterwards, feel free to continue the art theme with a visit to Rembrandt's house or perhaps the Van Gogh Museum!

*Please note: the voucher may be exchanged on any day, but the museum ticket and canal bus pass provided must be used on the same day as each other.

**Note that your Rijksmuseum ticket is not valid for any special exhibitions that are not included in the regular entrance fee.

Departure:
After breakfast transfer to the airport to return home or to continue onwards to your next Avanti destination!