Connect the Capitals (by Rail):
London & Brussels (or reverse)
Enjoy a tour combining the cosmopolitan cities of London and Brussels along with visits to some of the historic quaint towns in the countryside. Take in all the legendary attractions of London including Buckingham Palace, before a visit to Bath and the World Heritage site of Stonehenge. Travel in 1st class on the deluxe Eurostar train, whisking you from London to Brussels; European capital of the EU and NATO. And what's not to like about a country that boasts chocolate, waffles, frites, mussels, and beer. You'll also venture outside to the charming town of Bruges and the much underrated city of Ghent.
ACCOMMODATIONS
• 3 Nights London
• 3 Nights Brussels
INCLUSIONS
• Private Arrival & Departure Transfers
• Shared Panoramic Tour of London with St Paul's Cathedral, Changing of the Guard, and River Cruise
• Windsor, Bath, & Stonehenge Day Tour from London
• Brussels Grand Tour
• Bruges and Ghent Day Tour from Brussels
• 1st Class Rail between cities with seat reservation
• Daily Breakfast 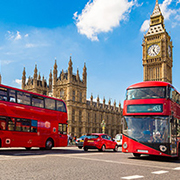 Arrive at London Heathrow and meet your driver for a transfer to your centrally located hotel. After checking in, the remainder of the day is at your leisure to explore independently or just relax. Dinner will be on your own this evening. 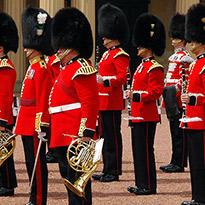 After breakfast, meet at the Golden Tours office adjacent to Victoria Station for your London Tour. Use your Oyster Card and take the tube or opt for a short taxi ride. You'll swing by Westminster Abbey for a photo stop before arriving at Sir Christopher Wren's masterpiece; St Paul's Cathedral. A short ride away takes us to Buckingham Palace for the traditional Changing of the Guards. We'll conclude the tour with a River Thames boat ride, passing the Tower of London and the London Eye. You'll disembark at Embankment Pier. The remainder of the day is free for exploring with plenty of options. For museum lovers, there's the National Gallery, Tate Museum, the Royal Academy of Arts, and Victoria & Albert Museum. Don't forget to stop for high tea and pastry at Fortnum & Mason or at Lady Di's favorite; Claridges. Shopping is always an adventure at Harrods in trendy Knightsbridge, Kings Road, as well as Covent Garden. Take in a popular play in the West End district or nearby Soho is also a great place to end the evening with an eclectic mix of dining and nightlife. 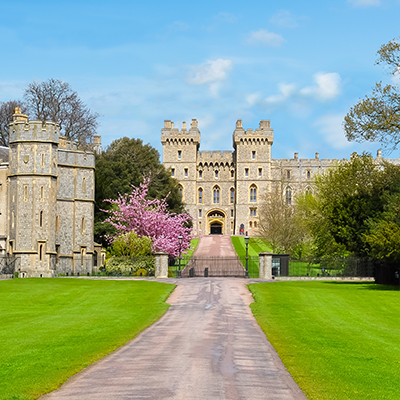 Arrive at the Golden Tours office at 8:30am for your full day Windsor Castle, Bath & Stonehenge tour. We'll start at historic Windsor castle, and you'll see why it's the Queens's favorite weekend residence. We'll head into the rolling countryside of West England for the awe-inspiring Stonehenge and ponder how this amazing structure was built. Our last stop is the beautiful city of Bath. Sites include the 15th century Bath Abbey, romantic Putnam Bridge, and the famous Roman baths, which gave the city its name. You'll have time for lunch on your own and do a little exploring on your own before heading back to London. There will be several convenient stops at Knightsbridge, Marble Arch and Victoria Station. 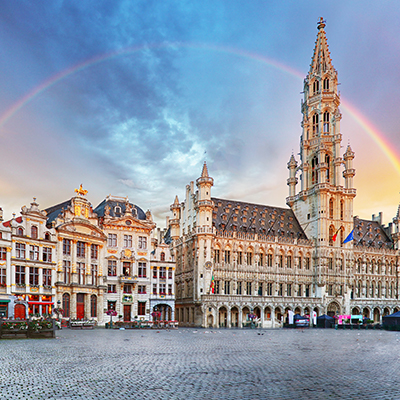 After breakfast, meet your driver in the hotel lobby for your private transfer to St Pancras Rail Station. You'll clear customs and pass through security for the 2 hour journey. Upon arrival at Brussels Central Station, meet your driver for the transfer to your hotel. The remainder of the day is at your leisure. Take the opportunity to have a Belgian beer (there are over 1500 to choose) combined with a waffle or "frites", since these are the original "French" fries. Attention comic book lovers! The Belgium Center for Comic Book Art is the home of Tin-Tin, and his creator; Herge. Housed in a historic art-nouveau building, you can see firsthand how a comic strip is formed. 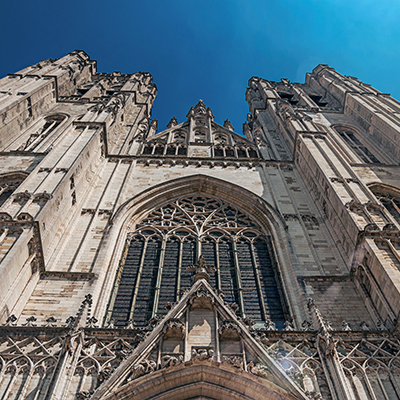 After breakfast, meet your tour guide at the Brussels City Tour office, adjacent to the Grand Place. We'll begin with a short walk with your guide explaining the history of the city hall and the guild houses that surround it. We will continue by bus to see St Michael's Cathedral and the Heysel district, home to the famous Atomium, as well as nearby Chinese Pavilion and the Japanese Gardens. Since we are in the heart of the European Union, we'll pass by several of the imposing EU buildings including the European Parliament. After stopping in the Cinquantenaire district with its Triumphal Arch, your tour will end at the Grand Place, and the remainder of the day is at your leisure.

Perhaps visit the Magritte museum. Magritte is arguably one of the 10 most famous painters in the world. If Dali is your cup of tea, you'll love this guy. You'll find over 200 of his works at the Place Royale. Another option is the Museum of Cocoa and Chocolate and it's conveniently right around the corner from Grand Place. Authentic Belgian chocolates are made with 100% cocoa butter and devoid of any vegetable oil. And unlike many chocolates that you buy locally, their handmade chocolates contain a very limited amount of preservatives. Thus they need to be stored carefully away from extreme heat and consumed within approximately 21 days! 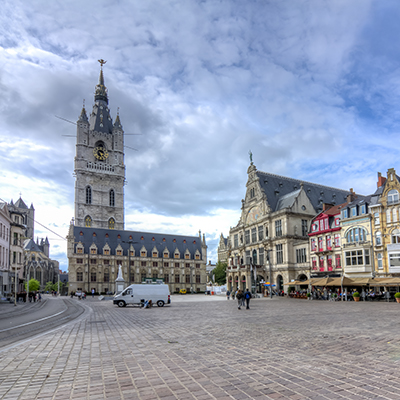 Today you'll have a tour of two of Belgium's famous cities: Ghent and Bruges. We will depart at 9am from the Grand Place. It's a one hour trip to Ghent, and Lonely Planet publications calls it "Europe's best kept secret". It's an architectural gem comprised of castles, cathedrals and museums. The Belfort tower, if you choose to climb it, affords amazing views of the city.

Just opposite is St Bavo's cathedral, where you will find the famous 24 panel Ghent Altarpiece, also known as the "Adoration of the Mystic Lamb". George Clooney's film, "The Monuments Men" is the story of a US platoon given the task of finding and saving pieces of art (including this) and other culturally important items before Nazis destroy or steal them, during World War II. As a side note, historians will note that the Treaty of Ghent was signed here, essentially ending the war of 1812 between the United States and England. Our tour moves on to Bruges. It's called the Venice of the North, but think of it as a medieval outdoor museum. It does have canals; lots of canals, as well as quaint cobblestone lanes. The Basilica of the Holy Blood remains one of their most important sites. Originally constructed in the 12th century, the Roman Catholic Basilica of the Holy Blood on the Burg houses a relic said to contain some of Jesus' blood brought back from the Holy Land by one of the Counts of Flanders. You'll have time to stroll around Market Square and the Belfry Tower, and even take an optional boat tour on the canals. Returning to Brussels about 7:30pm.

After breakfast, take your private transfer to the airport for your return flight home, or to your next Avanti destination!