Connect The Capitals:
Helsinki & Stockholm (or reverse)
These Scandinavian capitals are connected by overnight cruises on a modern, well-equipped ship. This package gives you one night in each of the two captivating cities, plus an overnight stay on a cruise ship where you can admire the breathtaking seascape as you pass by the Gulf of Finland and the beautiful islands of the Stockholm archipelago.
ACCOMMODATIONS
• 1 Night Helsinki
• 1 Night Stockholm
INCLUSIONS
• Overnight Cruise
• Daily Breakfast 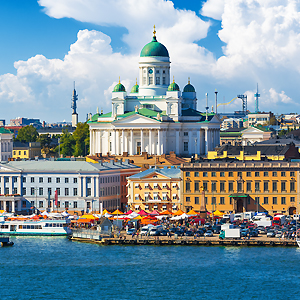 Helsinki is a fascinating city that will surely enchant any traveler. Take a taxi to your hotel and prepare to explore Finland's beautiful capital. The same architect who built St. Petersburg designed many of its main buildings, so Helsinki has often "doubled" for St. Petersburg in films. Take some time to walk around the Old Town near the harbor, and then head to the main streets for shopping. Famous for its glassware, fabrics and furniture, Helsinki appeals to those with a strong fashion and design sense, and one should not ignore its icons: Iittala glassware, Marimekko fabrics, and Arabia stoneware. 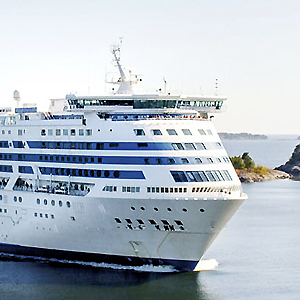 After breakfast, you'll have the day to explore the city. We recommend that you purchase a day ticket for use on Helsinki's excellent tram (streetcar) system, which will enable you to see as much of the city as you have time for. Be sure to see Helsinki Cathedral, the large white Lutheran church that dominates the skyline of the city, completed in 1862. Quarried out of natural bedrock, Temppeliaukio Church is one of Helsinki's most popular tourist attractions. Built directly into solid rock, it is also known as the Rock Church. The church was designed by architects Timo and Tuomo Suomalainen and opened in 1969. Due to its excellent acoustics, the church is a popular venue for concerts. Don't forget to check out a selection of Helsinki's cafés and restaurants.

Be sure to get to the harbor on time by 4:00pm to check in for your Silja Line luxury cruise to Stockholm. The ship departs Helsinki at 5:00pm. The cruise is very interesting, passing through a number of islands in the Gulf of Finland and the Stockholm archipelago. On board, you'll find well-equipped cabins, fine dining, entertainment, and tax-free shopping. 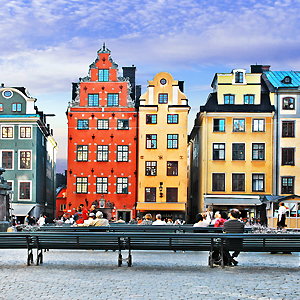 After breakfast on the ship, you'll reach Sweden's capital. Built on 14 islands that are connected by 57 bridges, Stockholm is one of Europe's most beautiful cities. It has an interesting Old Town, and some of the best examples of modern Scandinavian design. Don't miss Gamla Stan, Stockholm's oldest attraction and one of the best preserved medieval city centers in the world. Walk through small winding streets lined with stores full of handicrafts, antiques, art galleries, and cafés.

The Royal Palace, one of the largest in Europe, is home to Sweden's Royal Family, and has 600 rooms. The Skansen Open-Air Museum is the oldest open-air museum anywhere; 150 farm and town dwellings were disassembled and transported here, so you can see what family life was like two centuries ago. Not far away is the Vasa Museum, home to a 220 feet long Viking warship that sank on its maiden voyage in 1628, but was salvaged in 1961 and is almost fully restored. 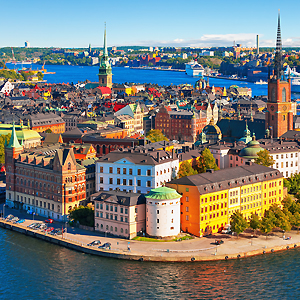 After breakfast at your hotel, continue your explorations of Stockholm, or head to your next Avanti destination.