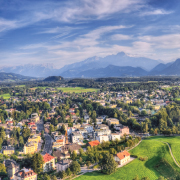 Arriving at the Salzburg Train Station, you'll be met and have a private transfer to your hotel. After checking in, walk into the Old Town, which looks much as it did when Mozart was born here 250 years ago. A city that became wealthy because of salt and its strategic location, Salzburg is a Baroque jewel of a town. Standing beside the Salzach River, your view is of many church spires as well as the awe-inspiring fortress that sits above the town. 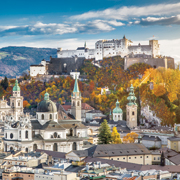 This morning, take the 2.5 hour Mozart City Tour to discover many of the highlights of this city dominated by its associations with both Mozart and The Sound of Music. Included are Mirabell Palace, the Mozarteum or Music Academy, Hellbrunn Palace, Mozart's residence and many more.

Included in the tour is a ticket for the Funicular up to Hohensalzburg Fortress plus entry into the Fortress, one of the largest medieval castles in Europe, begun in 1077. The views over the town from the ramparts are spectacular. Use your free time in the afternoon to enjoy seeing the castle and the panorama. 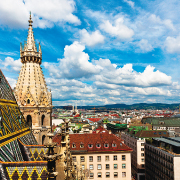 In the morning make your way to the train station where you'll board your express train for Vienna (travel time is 2.5 hours). Spend your free time today walking to the nearby Votivkirche, German for "Votive Church," a beautiful neo-Gothic church dedicated in 1879. Or consider taking a trolley ride on the tram that circles the inner city via the 150-year-old Ringstrasse, the wide boulevard built to replace the city's 13th-century walls and gates. 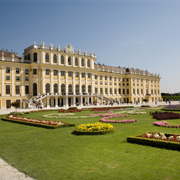 Once the capital of a great empire, Vienna is a cosmopolitan city of two million residents, with many remnants of its glorious past. Today you'll take a 3-hour city tour of the city - be ready to go at 9 a.m. from your hotel. This tour will give you an overall impression of the most significant historical sights of Vienna. You will see the Ringstrasse known for such magnificent buildings as the Museum of Applied Arts, the State Opera House, the Museum of Fine Arts and the Museum of Natural History. Also see the Hofburg, the famous residence of Empress Elizabeth, affectionately known as "Sisi" to the Austrians, as well as a host of other fine architectural examples including the Parliament, City Hall, the Burgtheater, the University and the Votivkirche. The highlight of this tour will be a visit of the showrooms of Schönbrunn Palace, once the summer residence of the Habsburg family and Maria Theresa, mother of Marie Antoinette, who later became Queen to Louis XVI. On the way back to the State Opera you will pass by the Belvedere Palace, the former summer residence of Prince Eugen. Your tour ends at the Opera House. From here you can stroll the historic walking street Kärtnerstrasse, past elegant hotels and shops as you head towards Stephansdom, the magnificent cathedral of Vienna. Located in the historic medieval center of the city, this Gothic church is worth exploring, as are the narrow lanes around it.

In the evening, make your way by subway U4 to the Schönbrunn stop, walk across the street to the ticket office at the Orangerie, and exchange your voucher for tickets to the Dinner and Concert at Schönbrunn. Dinner is at the Cafe Residence inside the palace grounds (Drinks not included). After dinner, walk back to the Orangerie for a concert of favorite pieces by Mozart and Johann Strauss. This is a magical evening you won't soon forget! 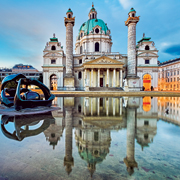 The day is yours to explore the city at your own pace. We suggest taking a tram ride for a visit to the Kunsthistoriches Museum, one of the finest art museums in the world with an extensive collection of Old Master paintings from Germany, Holland, Italy and Spain; an excellent collection of Egyptian artifacts; and several Greek and Roman antiquities. We recommend picking up an audio guide and a floor plan of the museum near the entrance. After spending a few hours here you'll be ready for a relaxing visit to a Viennese Coffee House or possibly a piece of Sachertorte at the Hotel Sacher near the Opera House. 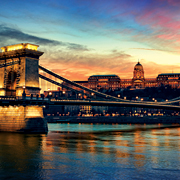 In the morning make your way to the train station for your 3 Hour first class train ride to Budapest. Afternoon and evening on your own. 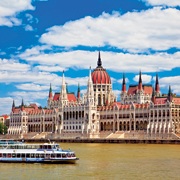 Today you'll have a three-hour city tour of sophisticated Budapest, called the "Paris on the Danube." Situated on both sides of the Danube River, Budapest has a wealth of Baroque, Neoclassical and Art Nouveau buildings, including the iconic Parliament Building, Matthias Church, Fishermen's Bastion and St. Stephen's Basilica. In the afternoon, free time to explore on your own. 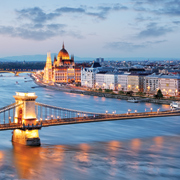 A free day to explore on your own. We suggest taking a tram to the Central Market - one of the largest covered markets in Europe, with an excellent selection of Hungarian food, handicrafts and clothing (closed Sundays). This is a great place to pick up paprika in its many varieties.

After having lunch at the Market, stroll up Váci utca, one of the main pedestrian shopping streets in the city, to window-shop or find some items to take home.

Departure:
After breakfast you'll have a private transfer to the train station or airport, to continue on to your next Avanti destination!