Chachapoyas
Warrior of the Clouds
Dare to go farther than Peru's most famous ruins and travel to the remote north to discover the mysteries of the fascinating Chachapoyas culture. These little known archaeological sites like the jaw-dropping Karajia Sarcophagi and Kuelap Fortress, provide an amazing canvas to explore. Enjoy the pristine surroundings of the Andes, far from the madding crowds.
INCLUSIONS
• Arrival and Depature Transfers
• 1 Night Chiclayo
• 4 Nights Chachapoyas
• Cocachimba Town and Gocta Waterfall Hiking Tour
• Karajia Sarcophagi and Quiocta Caverns Tour with Lunch
• Full Day Kuelap Fortress Tour with Lunch
• Daily Breakfast 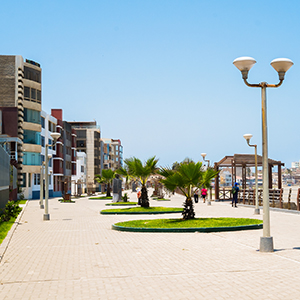 Arrive Chiclayo:
After arriving on your flight from Lima to Chiclayo, meet your English-speaking driver in the arrivals for your transfer to your hotel. After checking in, the remainder of the day is at your leisure. 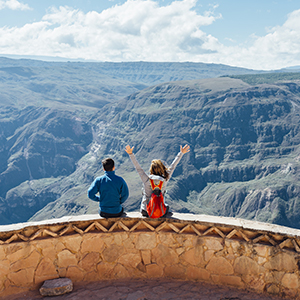 Journey to Chachapoyas:
After breakfast, meet your driver for the transfer to Chachapoyas; a lost civilization nestled high in the cloud forests of the Andes, and widely considered to be Peru's best kept secret. Your excursion will take you through one of the driest deserts on the planet, so temperatures will fluctuate as you descend and climb. There will also be a variety of flora and fauna as the vegetation changes from arid soil to fertile forests and even coffee plantations and orange trees. After a slow climb in the Andes, you'll descend to the Maraňón River, crossing over from Cajamarca to the Amazonas region. And finally ascend via the great Utcumbamba canyon before arriving late afternoon at your Chachapoyas hotel. A box lunch will be provided on your journey and dinner will be on your own this evening. 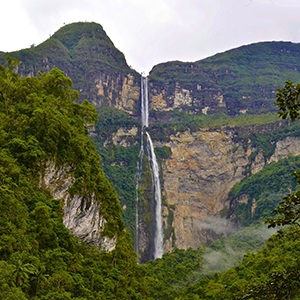 Gocta waterfall:
After breakfast, you'll have a short 90 minute ride to Cocachimba. In this village, you'll begin the hike to the spectacular Gocta waterfall. At 771 meter high, the amazing Gocta Waterfall is one of the tallest in the world. What's incredible about this waterfall is that it was known only to locals until 2002 when it was "discovered" by the German explorer, Stefan Ziemendorf. The town is located practically right beneath it, and the native villagers knew it as "Gocta," after the sound made by howler monkeys in the region. But they had mostly avoided the towering waterfall due to superstitions surrounding it. To get to the bottom of Gocta, we will walk about 5 km of a footpath of uneven terrain through a dense and very colorful rain forest. After arriving at the base of the falls, we'll rest to take in the views and enjoy unspoiled nature at its finest before returning to our hotel. 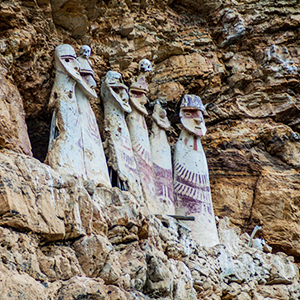 Karajia Sarciphagi, Utcubamba Valley:
After breakfast, meet your guide for an exciting journey to view the Karajia Sarciphagi. Karajia is an archaeological site located in the Utcubamba valley, containing a series of eight cliff-side mummies from the Chachapoyas culture. The mummies are housed within sarcophagi made of clay, straw and gravel spread over a wooden coffin. They've been sculpted and painted to resemble human figures, which local residents refer to as the "ancient wise men." This type of sarcophagus, called a purunmachu, can be found at many sites across the region, but the ones found at Karajia are the most important due to their extremely inaccessible cliff-side location, which has kept them untouched by grave robbers. We'll pause after this remarkable site and take time to enjoy a box lunch.

Afterwards we'll visit the nearby caverns of Quiocta. This series of six connected caverns leads deep inside the mountains to reveal calcareous needles with different shapes and sizes known as stalactites and stalagmites. There are also a number of human bones still found at the site. It's unknown why these bones have been placed inside the cave, so for now they remain a mystery just like many other things in this region. Returning to Chachapoyas, dinner will be on your own this evening. 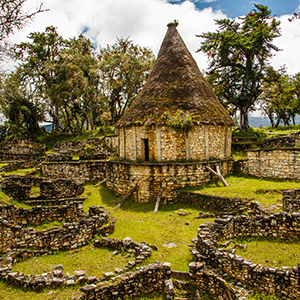 Citadel of Kuélap:
Today, you'll have the opportunity to witness the most important and best-known archaeological site of the Chachapoyas culture, the Kuélap Fortress. Located at an elevation of 3000 meters and surrounded by dreamlike cloud forest, the citadel of Kuélap is definitely the top attraction of the region. The site consists of over 550 structures in total, and it's theorized that the city may have at one time had a population of 3,500 people. Many believe that Kuélap was constructed specifically for its defensibility, as its elevated location and stone walls made it impregnable. Although Kuélap was discovered 60 years before Machu Picchu, surprisingly it's not recognized worldwide. You'll enjoy lunch in a local restaurant and reflect on this architectural phenomenon before returning to your hotel.

Depart Chichlayo:
Late morning, you'll have a return transfer to Chichlayo with boxed lunch to enjoy along the way. Arrive at the airport for your evening flight to Lima, or choose to add another night in Chiclayo before continuing on to your next Avanti Destination! Destination!