Cambodia Essentials:
Phnom Penh & Siem Reap
Nestled between Thailand and Vietnam, Cambodia has emerged from political and economic turmoil to become one of the most popular tourist destinations in Southeast Asia. Take a timeless journey through this relatively unexplored country beginning with its capital, energetic and pulsating Phnom Penh; a buzzing hub that's fascinating to explore. Then discover the region's most spectacular UNESCO World Heritage site; Angkor, an ancient city boasting a massive temple complex set on one of the most important archaeological sites in Southeast Asia; the temple of Angkor Wat. This awe-inspiring temple of is unrivaled in its grandeur. You'll visit many of the fascinating Angkorian temples in Angkor Thom, dating from the 12th century, making this an unforgettable trip for both historical and archaeological buffs.
ACCOMMODATIONS
• 2 Nights Phnom Penh
• 3 Nights Siem Reap
INCLUSIONS
• Private Arrival & Departure
Transfers Per City
• Private Phnom Penh
City Tour
• Private Angkor City Tour
• Daily Breakfast 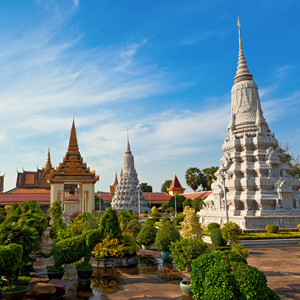 Upon arrival at Phnom Penh Airport, meet your English-speaking driver for your private transfer to your hotel. Remainder of the day is free for relaxing or exploring your surroundings. 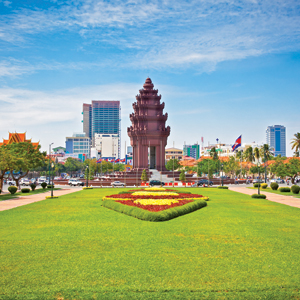 After breakfast, meet your English speaking guide for a Private Phnom Penh City Tour. You'll ride in a remok motor tuk-tuk, the most popular mode of transport in Cambodia. It's a fun, exotic and local way of experiencing the city as you weave along the Tonle Sap river. Explore first hand this sometimes chaotic, frenetic, but always fascinating city. Driving along graceful tree-lined boulevards and riverfront promenades are reminders of a bygone era.

Today, they teem with life and activity, as motorcycles weave in and out of traffic, vendor hawk their wares, and pedestrians go about their daily business. You'll visit the elegant National Museum. Wander the halls to acquire an insight into an artistic heritage that stretches back centuries. We'll continue to the Royal Palace and Silver Pagoda, standing on the site of the former citadel, Bantey Kev. Visitors are not allowed to visit some areas of the grounds, as the palace is the official residence of King Norodom Sihamoni. The silver pagoda is often called the Pagoda of the Emerald Buddha or Wat Preah Kaeo after the statue housed there.

Our final stop will be at Psah Thmay, the city's central market. This famous Art Deco building (1937), consists of a huge central dome with four wings opening out into large halls. It contains countless stalls run by more than 3,000 merchants.Returning to your hotel, dinner will be on your own this evening. 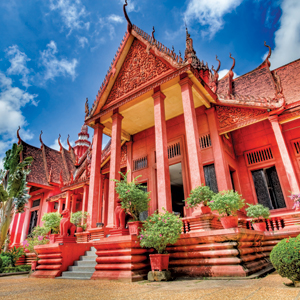 After breakfast, your driver will meet you for your private transfer to the airport, and your short 45 minute flight to Siem Reap, the gateway to the Angkor region. You'll have a private transfer with your guide to the hotel, and the remainder of the day is free for relaxing or exploring your surroundings. 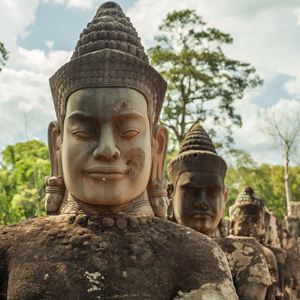 After breakfast, your guide will meet you for a Private Angkor City Tour. Located just 4 miles north of Siem Reap, this tour will encompass all the attractions of Angkor, from Angkor Wat itself to the royal city of Angkor Thom.

Angkor Wat is the crown jewel of Khmer architecture, and the national symbol of Cambodia. The largest, best preserved, and most religiously significant of the Angkor temples, Angkor impresses visitors both by its sheer scale and beautifully proportioned layout, as well as the delicate artistry of its carvings. We'll stop at Sras Srang, a basin opposite of Banteay Kdei measuring 800 by 400 meters, with a tiny island in the middle where only the stone base remains of what was once a wooden temple.

Your next site will be Angkor Thom, the fortified city covering an area of 10 square km. Enclosed by a wall and wide moats, the city includes many of Angkor's most popular sights. You'll continue to the Terrace of the Elephants and the Terrace of the Leper Kings, former spaces for public ceremonies, both adorned with dramatic bas reliefs. You'll view the ruined Baphuon, Royal Enclosure and Phimeanakas before continuing to the mysterious Bayon Temple. In this temple, one of the most popular and compelling in Angkor, explore the galleries of beautifully preserved bas reliefs and ascend narrow stairs to reach the central sanctuary, where you will find giant stone faces smiling enigmatically down at you from every angle. The imposing Banteay Kdei Temple is a massive Buddhist temple dating from the second half of the 12th century, surrounded by four concentric walls.

Finally, we'll visit Ta Prohm, one of the more popular attractions of Angkor. A large area of the jungle has not been cleared so it looks very much as most of the Angkor monuments would have appeared when European explorers first stumbled across them. Your tour ends watching the sun set over the Cambodian countryside from the upper terraces of an ancient Angkorian temple.

*When touring any of the wats or temples, visitors are asked to dress modestly. 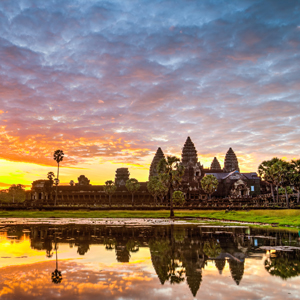 The day is at your leisure for relaxing or pick one of our recommended tours:

Private Khmer for a Day Tour
Take a drive with your private driver and guide to Kompheim Village. When you arrive you will take an ox cart ride through the village and even learn how to drive it! You will then meet the host family who you will be working with today and take part in the current activity that they are working on. Afterwards you will meet another family to prepare a delicious khmer lunch from fresh ingredients around the area. After the delicious lunch, take a short walk to see the rest of the village including the Husk community school and workshop and learn about their projects. Transfer back to town by mid-afternoon.

After breakfast, you'll have a private transfer to Siem Reap Airport and onward to your next Avanti Destination!