Bremen and Bremerhaven Regional Highlight (by Rail)
Visit the sister cities of Bremen and Bremerhaven to discover unusual maritime attractions and UNESCO World Heritage. Explore the German Emigration Center in Bremerhaven that tells the stories of 7.2 million emigrants who set sail from here towards the New World. Dive into the history of Germany's largest port of emigration and learn about the relationship of emigration in the past and immigration in the present. Who knows? Perhaps you will learn a thing or two about your own heritage?
ACCOMMODATIONS
• 1 Night Bremen
• 2 Nights Bremerhaven
INCLUSIONS
• Private Bremen Walking Tour
• Private Bremerhaven Walking Tour
• Entrance to German Emigration Center
• Daily Breakfast 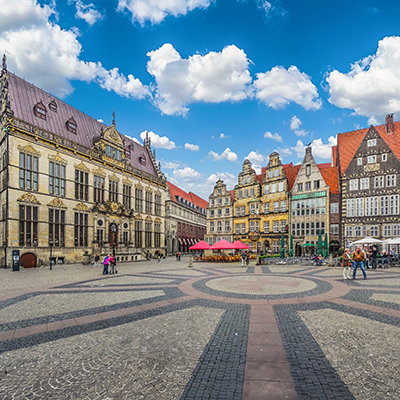 After arriving in Bremen, check into your centrally located hotel. The remainder of the day is at your leisure to rest or explore your surroundings. 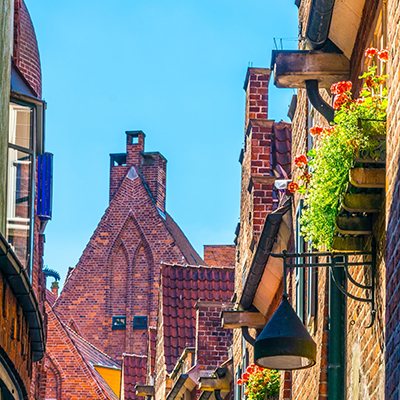 After breakfast, meet your guide for a private walking tour taking you to the highlights of Bremen's historical city center. Many of these are concentrated on the market square, the focal point of the city and undoubtedly one of the prettiest squares in Germany. Of particular note are the magnificent town hall and the stone statue of Roland, which were jointly accorded UNESCO World Heritage status in June 2004, and the sculpture of the legendary Bremen Town Musicians from the Brothers Grimm fairytale. Also on the itinerary is Boettcherstrasse, a pedestrian alleyway bursting with tradition where the boettcher (coopers) used to make their barrels. Leading from the market square down to the Weser River, the most famous street in Bremen is an attraction in itself with historical red-brick buildings interspersed with modern Expressionist architecture. Your guided walk also takes in the picturesque Schnoorviertel, the oldest part of Bremen that is still intact today. Its rambling lanes, where fishermen, artisans, and sailors once lived, are now home to delightful cafes, inns and taverns, top-notch restaurants and all manner of handicrafts.

Later in the afternoon, take the short 30 minute train ride to Bremerhaven. This Free Hanseatic city is famous for its large harbor; once the biggest in Germany, from where all the overseas ships departed. After checking into your hotel, the remainder of the day is at your leisure. Stroll around Bremerhaven's waterfront with its old ships and rusty docks, as well as the Alte Burger quarter. Tonight, explore the Shop Window Fishery Harbor, full of upscale restaurants and cozy harbor pubs. 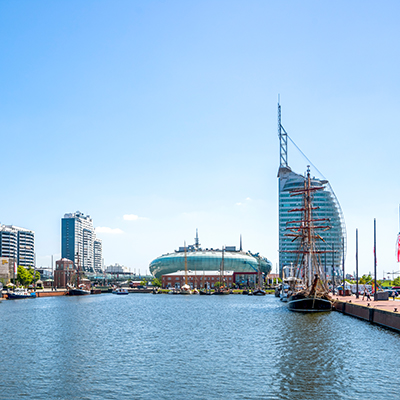 After breakfast, meet your guide in the lobby for your private walking tour. Your guide will provide insight into some of the city's attractions as well as historic commentary. Sites to be seen include the Klimahaus Bremerhaven 8° (entrance not included); a contemporary meteorological center with interactive weather & climate exhibits, and the Simon-Loschen Leuchturm, which looks more like a church tower than a lighthouse. It dates back to 1855 making it the oldest working lighthouse on Germany's North Sea coast. Visit the look-out-platform at Sail City at more than 140 meters (460 ft) at the top of the sail-shaped Atlantic Hotel Sail City, one of the tallest structures on Germany's North Sea coast. You'll also pass through Schaufenster Fischereihafen, Bremerhaven's century-old fishing harbor that has been revitalized with restaurants, cafes, pubs, and maritime-themed shops.

The tour will end at the German Emigration Center, Europe's largest theme museum about emigration. Visitors can experience the emigration process through interactive exhibits, full of state-of-the-art museum technology, beginning with the admission ticket, an iCard. The electronic boarding pass allows visitors to embark on a personal journey of 300 years of immigration and emigration history. Each iCard contains the story of an individual who either emigrated to the New World or found a new home in Germany. The iCard also activates many audio stations and interactive displays making a museum visit a thoroughly personal and emotional experience. Individual information and pictures enable identification with the actual person and invite visitors to become more involved with their story and thus, the history. You'll navigate through the cramped sleeping and dining quarters and the being "processed" at Ellis Island. At the end of the tour visitors have the opportunity to embark on a personal search for their own ancestors in two international databases. Even if you're not of German ancestry, it is a remarkable experience for everyone!

After a leisurely breakfast, make your way to the rail station for your return home, or on to your next Avanti Destination!