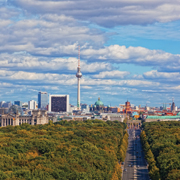 Arrive Berlin:
Start your exploration of this exciting city with a hop-on/hop-off tour in a double-decker bus. 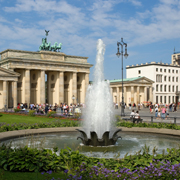 Berlin:
Choose from two routes: one focuses on the central Berlin sights, while the other visits the trendy districts of Prenzlauer Berg, Friedrichshain, and Kreuzberg. After your tour, we recommend that you take an elevator ride to the top of the newly rebuilt Reichstag building for a great view of the city. From there, stroll south past the Roma & Sinti Memorial to snap a picture of the Brandenburg Gate before exploring the maze of the Holocaust Memorial. Head south to Potsdamer Platz, a new city quarter and showcase of contemporary architecture built in the 1990s. Peruse remnants of the Berlin Wall before returning to your hotel by U-Bahn (subway). The city is full of outstanding modern architecture—some rebuilt from pre-war rubble. Spend today walking through the Tiergarten to the Brandenburg Gate. Consider visiting Museum Island, where you can see the famed Pergamon Altar, as well as the stunning Gate of Ishtar, one of the eight gates from the city of Babylon, built by King Nebuchadnezzar in 575 BC, and reconstructed here using the original bricks. Along the way, you'll pass by many art galleries, cafes, and churches. Feel free to stop, take a break, and enjoy the atmosphere of this vibrant city. 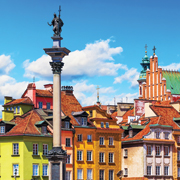 Berlin to Warsaw:
After breakfast, make your way to Berlin's new Central Train Station and catch your train to Warsaw—about a six-hour trip. While much of Warsaw, today's capital of Poland, was destroyed during World War II, the Old Town and the Royal Castle were rebuilt, and are now on UNESCO's World Cultural Heritage List. 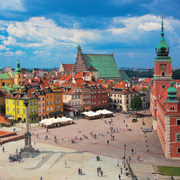 Warsaw:
After breakfast depart on a 3-hour tour to see Old Town with Market Square, St. John's Cathedral, Barbican and Castle Square, and the King Sigismund Waza Column, with a photo stop at Parliament and a visit to Lazienki Park and the Palace on the Water, Chopin's Monument, and the Belvedere Palace. Return to your hotel at end of tour before enjoying a 3-course traditional Polish dinner at a nearby restaurant. 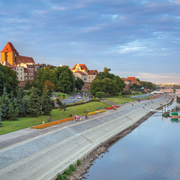 Warsaw to Toruń:
After breakfast, you'll be picked up for your transfer to the train station for the 2 hour 45 minute train ride to Toruń. Upon arrival, you'll be transferred to your hotel in the center of the Old Town. After checking in, you will join a private walking tour of the city's main attractions and historic buildings, including admission to the Gingerbread House, where you will learn the history of gingerbread baking in Toruń, which goes backto the 15th century. After the walking tour, return to your hotel for a rest before dinner! 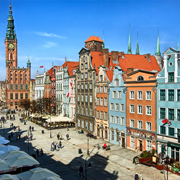 Toruń to Gdańsk:
After breakfast, you'll be picked up by your driver/guide for your private transfer to Gdańsk. Along the way, you'll stop at Malbork Castle, a 14th-century fortress which is now a UNESCO World Heritage Site. The castle was built by the Teutonic Order, a group of Prussian military monks who participated in the Crusades. The castle, a fine example of Gothic rick construction, is the largest castle in the world by surface area. Destroyed during World War II, the castle was rebuilt according to plans used in a previous rebuilding. There will be time for lunch during this stop. After finishing your tour of the castle, your driver/guide will drive the last few miles to Gdańsk, where you'll find your hotel in the town center. 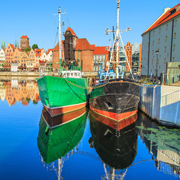 Gdańsk:
This beautiful seaport city has a thousand years of history. Also known as Danzig in German, this city has changed hands between Germany and Poland several times over the centuries. More recently, Gdańsk was the birthplace of the Solidarity union movement in 1980, led by Lech Walesa, which ultimately led to the end of the Communist government in Poland, and Walesa became Poland's president in 1990. This morning you'll have a private walking tour of the Old Town. Later, your guide will accompany you to Oliwa, where you'll visit the impressive cathedral and hear an organ concert on its historic organ, constructed in 1763. After Oliwa, you'll take a local train to the seaside town of Sopot. You'll have a short tour of the town, followed by leisure time to explore the town pier. In the late afternoon, take a local train back to the main part of Gdańsk.

Depart Gdańsk:
After breakfast, head for the trains station to start your next Avanti adventure!