Andean Argentina:
Salta, Cafayate & Purmamarca
The Andean highlands in northwestern Argentina reflect the country's Indian heritage - both in modern times and in the archaeological remains of past civilizations. Characteristic of this scenic region are high peaks, deep canyons, desert landscapes of sand and cactus, and interesting rock formations. Small villages let the seasons pass by quietly, interrupted only by carnivals and Indian markets. They worship Pachamama or Mother Earth, who provides maize and the pastures where the llamas and guanacos graze. Salta, the cultural center of the region, offers colonial architecture in contrast to the Indian traditions and folklore.
ACCOMMODATIONS
•2 Nights Salta
•1 Night Cafayate
•1 Night Purmamarca
INCLUSIONS
• All Ground Transfers
• Salta City Tour
• Cafayate City Tour
• Humahuaca Tour
•Daily Breakfast

Arrive in the morning so that you have time for the City Tour.

Salta City Tour: Depart from your hotel for a panoramic sightseeing tour of the city of Salta, one of the most picturesque cities in Argentina. It is also known as "Salta the beautiful", due to its privileged setting in the lovely Lerma Valley. Salta has the best preserved colonial heritage in all of Argentina, with its one-story houses with typical balconies and richly ornate colonial-style bars.

Salta to Cafayate:
Cafayate City Tour: Cafayate is a beautiful colonial village located in the heart of the Calchaqui Valleys. We will drive through villages, the Cafayate River Gorge, and wineries.

Cafayate to Purmamarca:
After breakfast, transfer to the picturesque village of Purmamarca, located at the foot of the striking Seven Colors Hill. Overnight. 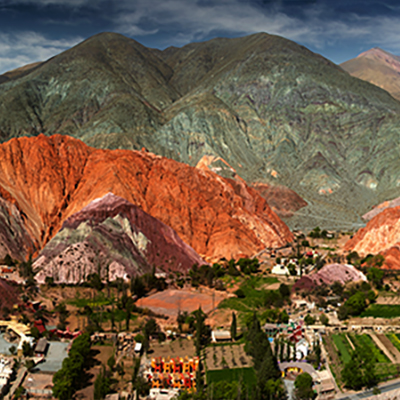 After breakfast, take the Humahuaca Tour on your way back to Salta. Overnight.

Humahuaca Tour: Travel through the well-know Humahuaca Gorge, a deep fissure in the Altiplano (High Plateau). Continue past colorful towns including colonial Humahuaca, San Salvador de Jujuy, and Maimara near the colorful "Painter's Palette", a famous formation on the mountain slope.

Depart Salta:
After breakfast, continue on to your next Avanti destination.