The Alps, Short and Sweet (by Rail):
Munich, Garmisch-Partenkirchen & Innsbruck
Discover all the attractions of southern Germany and Tirol. You'll visit the Bavarian capital of Munich, the home to historic Marienplatz, the annual Oktoberfest and the Hofbrauhaus. Venture from Munich into the famous ski town of Garmisch-Partenkirchen, and ascend onto Germany's highest peak; the Zugspitze. Continue your Alpine adventure to Austria and enjoy the charms of Innsbruck. Take a tour of the famous Swarovski World and learn about the history in this fairytale world of shimmering crystals.
ACCOMMODATIONS
• 3 Nights Munich
• 2 Nights Garmisch-Partenkirchen
• 2 Nights Innsbruck
INCLUSIONS
• Private Arrival Transfer
• Munich Hop On/Off City Tour
• Munich Evening Beer and Food Walking Tour
• Private Tour to the Top of the Zugspitze
• Swarovski Crystal World Tour
• 1st Class Rail between Cities
• Daily Breakfast 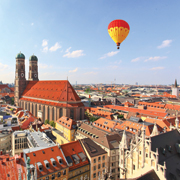 Arriving at Munich Airport or Rail Station, meet your driver for a private transfer to your hotel. After checking in, the remainder of the day is at your leisure to rest or explore your surroundings. 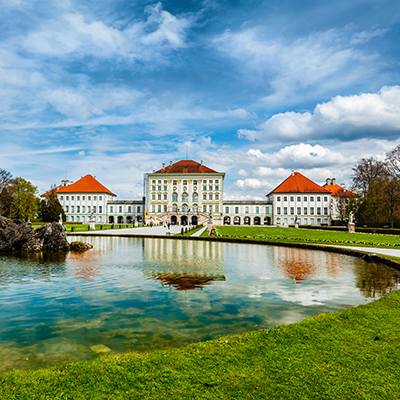 After a leisurely breakfast, make your way to the Bahnhofplatz (in front of the Karstadt department store) to begin your Hop On/Hop Off Bus Tour. Operating on open air double decker buses, your flexible pass allows you to jump off and back on to visit attractions, do some shopping, and get a bite to eat. Some of the important stops are Marienplatz, the Olympic grounds, Nymphenburg Palace, and Schwabing (English Garden). 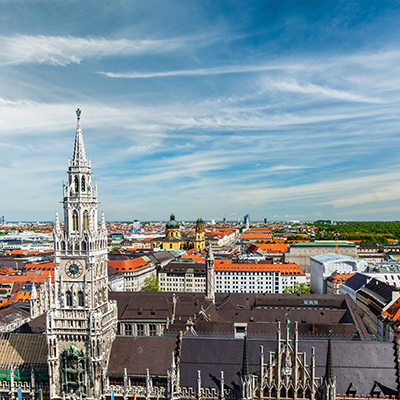 Today is free for independent exploring. Go back and spend more time at some of the museums or churches. Take the short ride to the palace at Nymphenburg, this regal 18th century Baroque gem has been called the "Versailles of Germany". Make sure a stop at Marienplatz is on your agenda. Daily at 11am and noon, and at 5pm from March through October, everyone stops to watch the famous Glockenspiel on the front of the Neues Rathaus (New City Hall), as its mechanical figures dine, joust, and dance. A short distance away are the twin towers of Frauenkirche (Church of Our Lady), and provide a good landmark for orientation. Visible from all over the city, you can climb to the top for views across the city to the Bavarian Alps. The English Garden attracts walkers, joggers, and cyclists to its 78 kilometers of pathways and bridle paths. It's also a popular place for locals to sunbathe and picnic. Stop for a snack or drink at the Chinesischen Turm (Chinese Tower), a 25-meter-tall pagoda . For automotive fans, next to BMW's soaring headquarters and factories at the Olympic Park is a round contemporary building with a metal shell, housing BMW's museum. Here, car fans will find examples of nearly all the models the company has made, including sports cars, racing models, and motorcycles.

Tonight a fun-filled evening awaits with a beer and food walking tour. Meet your guide at the Munich Central Train Station at 5:45pm and the tour will commence at 6pm. Our walk will take us into the heart of Munich's beer culture, and you'll see where the locals go. Along the way, you'll learn how beer is brewed, the fascinating story of German brewing, and the revered Reinheitsgebot (Purity Law) of 1516. We'll be given an exclusive private tour through the Beer and Oktoberfest Museum in one of Munich's traditional beer garden. To end the evening, you'll experience several traditional Bavarian dishes at your own table in one of the city's finest old beer halls, and finish at the world famous Hofbrauhaus, Germany's most famous beer hall. 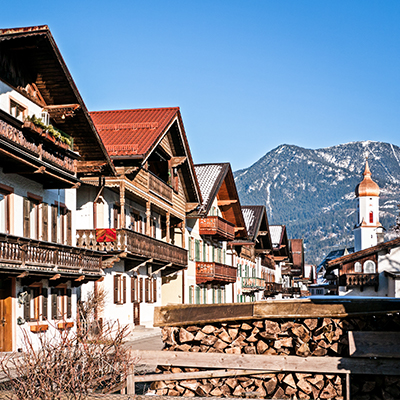 After breakfast, make your way to the Munich rail Station (Hauptbahnhof) and take your 90 minute ride to Garmisch-Partenkirchen. (There are 23 trains a day) These were two towns independent of one another until Adolph Hitler forced them to come together for the 1936 Olympic Games. Both towns are pedestrian friendly with Garmisch tending to be livelier and trendy, while Partenkirchen remains more staid and traditional. In any event, both towns are worthy of exploring. 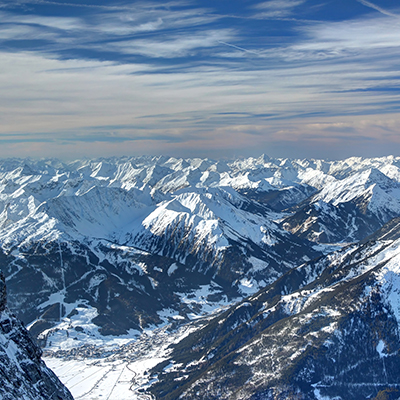 After breakfast, meet your guide at 10am at the Bahnhof of the Zugspitzbahn, just next to the main rail station. While the Zugspitze is a popular ski resort, it's also an attractive destination for non-skiers. You'll begin by taking the cog railway to the Zugspitzplatt (a little more than an hour). Take a break to enjoy the views, maybe have a hot drink or snack before switching to the Glacier funicular. Your ride will take about 15 minutes. The Zugspitze is the highest peak of the Wetterstein Mountains as well as the highest mountain in Germany. Right at the top, an impressive 360° panorama opens up to reveal extensive views over 400 mountain peaks in four countries. While at the peak, enjoy some of the additional attractions including the Zugspitze-Exhibition, highlighting the historical developments of Germany's most famous mountain, plus two toboggan runs, Germany's highest church, an igloo village, and an excellent mountain restaurant. You'll descend via the new Zugspitz Funicular down to the Eibsee and take the cog railway again back to Garmisch Partenkirchen. The remainder of the day is at your leisure. 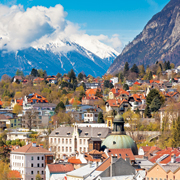 Today we'll cross into Austria by rail, arriving in the Tyrolean capital of Innsbruck in less than 2 hours. From the rail station, your hotel will be a short walk or taxi drive. After checking in, the remainder of the day is free for exploring. Walk through the Old Quarter to the famous Goldenes Dachl (Golden Roof). Made up of 2,657 gilded copper tiles, the Golden Roof was built in 1496 to commemorate Maximilian I's marriage. Whether you're looking for things to do in Innsbruck, you'll find riding the new Nordkettenbahnen both a thrilling and scenic experience whatever the weather. The funicular begins in the heart of the city and carries you across the river Inn and up to Hungerburg, where cable cars take you farther up to Seegrube and on to 2,300-meter-high Hafelekar for 360-degree views. Restaurants and viewing platforms are at each stopping point, and several hiking trails take off across the mountains. After this exhilarating ride, enjoy dinner in one of the Old Quarter restaurants. 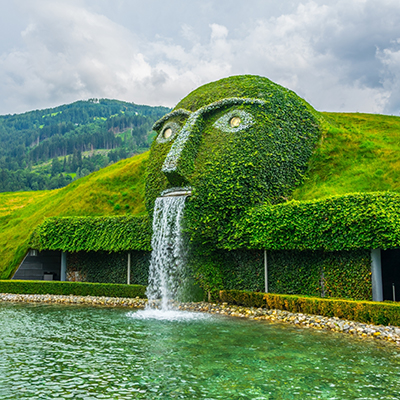 Today you'll have the opportunity to visit Swarovski Crystal Worlds, just a short 12 miles outside the city in Wattens. This excellent museum and art gallery was designed to showcase the world-famous company founded by Daniel Swarovski in 1895. Its 14 chambers display impressive artworks in crystal, and highlights include the superb Crystal Dome, the Crystal Theatre, and the enchanting Crystal Forest installations, all displaying unique pieces made by contemporary artists from around the world. The start time for the tour is 9am at the rail station. To tour the entire exhibit will last approximately 4 hours, however you can determine the duration. The shuttle operates 4 times daily with the last bus returning at 3pm.

After breakfast, travel to the airport or rail station by taxi for your return home or on to your next Avanti Destination!