Adriatic Paradise Cruise:
Split, Korčula, Hvar, Brač, Slano & Dubrovnik
This fascinating cruise includes all the main attractions of the Dalmatian coast like the UNESCO World Heritage sites of Dubrovnik and Split. En route, you'll enjoy visits to the inviting islands of Brač, Hvar, Korčula, Mljet, and the hidden coastal jewel, Omiš. Cruising along this dramatic coast and islands, you'll see why the Adriatic has become Europe's newest hot spot. And who can argue with its countless historical sites, picture-postcard towns, azure blue waters, and ideal Mediterranean weather.
INCLUSIONS
• Private Arrival and Departure Transfers in Split
• Accommodation in Chosen Category Cabin
• Land Excursions to Montenegro
• Optional Walking Tours in Ports
• Half Board on Cruise 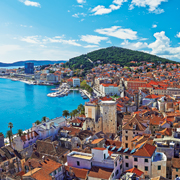 Arrive Split:
Arrive in Split Airport, and meet your driver for a transfer to your hotel. The remainder of the day is at your leisure to explore independently, and dinner will be on your own this evening. 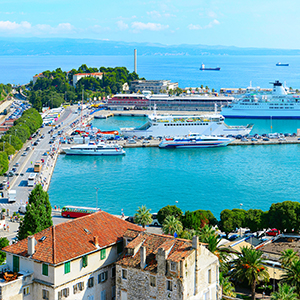 Split:
Your morning is free, and after checking out of your hotel, you'll transfer to the pier to board your ship. Over a welcome drink and a snack, meet your Cruise Director and the staff, and get acquainted with the rules and safety measures of the ship. Your journey begins with a sumptuous meal in the salon/dining room, and the ship remains overnight in Split. 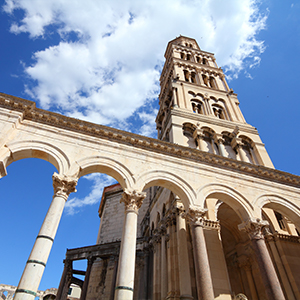 Today is the day for enjoying the highlights of the central Dalmatian coast. After breakfast, choose to explore Split on your own or join a walking tour of Split's famous Diocletian Palace. Built to house the Roman Emperor, the palace grew into a city after Slavs ravaged the nearby Roman town of Salona. With our local guide, discover the secrets of centuries past in what is today, the vibrant core of Dalmatia's largest city. Then, hop over to the island of Hvar, known for its purple lavender, the red of its wines and its pronounced Venetian feel. Join an optional guided walking tour of Hvar or explore on your own before taking a refreshing swim at Pakleni, the wondrous neighboring islands. Finally, a short sail takes you to Vela Luka on Korčula (KOR-chu-la), where you will arrive for a relaxing afternoon. Tonight, enjoy a festive Captain's Dinner on board. 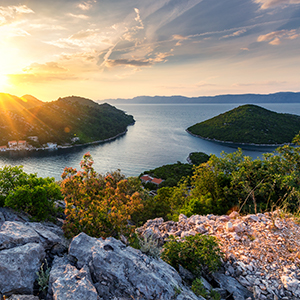 Slano:
Your captain will choose a secluded bay to hop in the sea and start the day. Surrounded in deep green forests which earned Korčula its name and fame, meditate upon the sound of crickets and silence as you immerse yourself in the essence of this region: the crystal blue sea. Then continue to another green island, this time Mljet. The national park on the island is the home of two salty lakes connected with the sea via a narrow canal. Nature lovers will thrill from hiking or cycling here, or possibly even kayaking to the small islet in the center of the lake, with the charming 12th-century Monastery of St. Mary. Alternatively, join our optional excursion (not included), but whatever you do, do not miss out on Mljet! You'll spend the evening in the small settlement of Slano on the mainland, once adored by Dubrovnik sea captains. This becomes self-evident as soon as you take your first stroll along the waterfront. Dinner will be on your own this evening.(Breakfast, Lunch & Accommodations, On Ship) 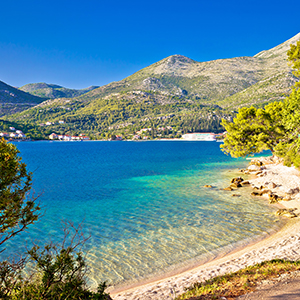 Dubrovnik:
In vicinity of Slano, the petite town of Ston claims its fame for many things gourmand: strong wines, ancient salt production and succulent oysters and mussels. Our optional tour: the Taste of Dalmatia (not included) highlights all these treasures, but you can also just relax in Slano before sailing out to Dubrovnik. Midway, a dip on Lopud Island gets you up and ready to join a guided tour of Dubrovnik's Old Town. Surrounded in immense city walls, as if in a universe of its own, the world-famous facades line up as you walk the same streets like the cast and crews of the Game of Thrones, Star Wars, and Robin Hood; all utilizing the Old City for filming. Enjoy an evening of romance, glitz and glam, as you will be staying in Dubrovnik overnight, and dinner will be on your own.(Breakfast, Lunch & Accommodations, On Ship) 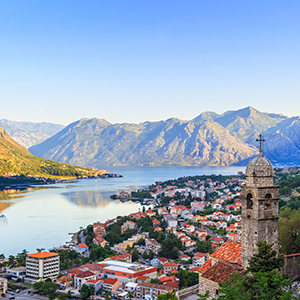 Dubrovnik:
In the morning, venture east for an excursion into Montenegro, passing the serene valley of Konavle. The scenery turns more dramatic, with snow capped mountains looming over the turquoise Adriatic Sea. Driving around Boka Bay, its beauty entices with settlements inhabited as early as the Illyrian and Roman times. Discover the picturesque Perast with its quaint seafront and Our Lady of the Rocks church, poised on a man-made island facing the town. Next, visit the UNESCO-listed gem of Kotor. Compare it to Dubrovnik, and you'll discover the distinct Venetian heritage as the main difference. After your guide leads you through a maze of curvy alleys and sun-kissed piazzas, you'll have time to explore on your own before returning to the ship. This evening enjoy dinner on board as you overnight in the Dubrovnik area.(Breakfast, Dinner & Accommodations, On Ship) 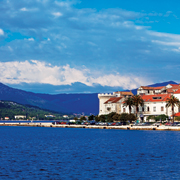 The far south of Croatia holds many gems. Scattered between Dubrovnik and Korčula, the Elaphite archipelago is alluring for its pristine islands, which were once an oasis for local seamen to build their ships and for captains to build their estates. Today, the Elaphites are praised for their quaint ambiance. You'll stop at one of the three inhabited islands for a stroll and a swim, before lunch on board en route to Korčula. You'll know Korčula was a Venetian stronghold as soon as you lay your eyes on the many lion statues which lurk at you from the town's facades, along with some of the most outstanding stonework you will see anywhere on the Adriatic coast. The alleged home of the world-renowned traveler Marco Polo is bound to charm you whether you explore it on your own, or in a walking tour. You'll overnight in Korčula and dinner will be on your own this evening. 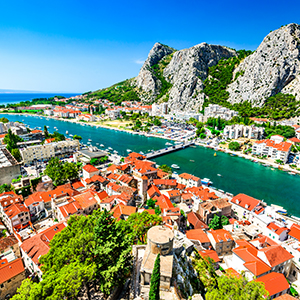 Omiš:
Breakfast is served over the stunning views of the playfully dispersed archipelago of Korčula, and followed by a scenic sail around the tips of Pelješac peninsula and Hvar Island. You may even be able to take a refreshing dip along the way. Stop to visit the homeland of "the Croatian marble" on the less-touristy island of Brač. You've probably seen this ultra-quality limestone already, perhaps on the front of the White House in Washington DC, but the optional tour to the still-operating stone masonry school in Pučišća (not included), brings a chance to learn more about shaping of this stone. Once back at the mainland, you'll be visually stunned by the dramatic rock formation backing the lovely settlement of Omiš, perched at the mouth of Cetina River. Dinner will be on your own in this lovely town. (Breakfast, Lunch, & Accommodations, On Ship) 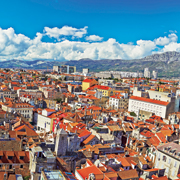 Split:
Bright and early, head from Omiš to Split. Enjoy a farewell breakfast before saying goodbye your fellow travelers and crew and disembarking. You'll have a transfer to your hotel for overnight in Split.

Split:
After breakfast, meet your driver for a transfer to Split airport, and onward to your next Avanti Destination!